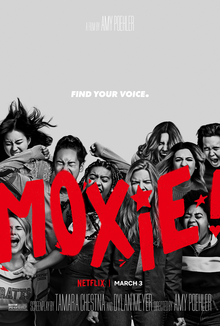 Not suitable under 13; parental guidance to 15 (themes of sexual violence and harassment)

When shy 16-year-old Vivian (Hadley Robinson) discovers her mother’s (Amy Pohler) rebellious and feminist past, she teams up with new student Lucy (Alycia Pascual-Pena) to take on the gender inequities at school. Armed with an anonymous zine, they call out sexism, racism, and harassment. Consequently, this causes conflict with Principal Shelly (Marcia Gay Harden), Vivian’s childhood best friend Claudia (Lauren Tsai), the captain of the football team Mitchell (Patrick Schwarzenegger), and Vivian’s own sense of identity.

Moxie is a film about young adults and identity, directed by comedian Amy Pohler. With strong themes of intersectional feminism and racial inequality, this film provides a current and thoughtful exploration of gender and respect. Due to the themes and plot, this film will likely entertain viewers aged 13 and older, with parental guidance recommended to 15 due to themes of sexual violence and harassment and sexual references.

The main messages from this movie are that standing up for important causes – especially those that impact vulnerable members of society – is an honourable enterprise; and that women deserve respect and to feel safe at school from harassment, discrimination, and sexual violence.