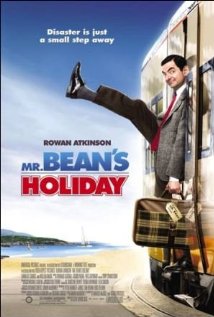 Mr. Bean (Rowan Atkinson) wins a holiday in Cannes in a local parish raffle. He takes the Eurostar to Paris and from there he hurtles headlong into one catastrophe after another. At the Gare du Nord railway station Bean asks a fellow passenger, Emil Duchevsky (Karel Roden) to film him getting on the train and in so doing causes Emil to miss the train. Emil is in fact a famous film director, whose young son Stepan (Max Baldry), is waiting for him on the train. Emil conveys to Stepan that he should get off at the next station. Bean, feeling responsible, also gets off and of course, the train that Emil is on doesn’t stop.
Bean and Stepan then go on a journey across France, having to raise money along the way as Bean left his wallet and passport on the station. They stumble onto a film set where Bean falls for an attractive young actor named Sabine (Emma de Caunes). Sabine agrees to drive Bean and Stepan to Cannes as she is also heading there for an opening preview of a movie in which she has a part. They head to Cannes not realising that they are being hunted by the police as suspected kidnappers.

There is some violence in this movie, mostly slapstick comedy, including:

Apart from the violence listed above, there is little in this movie that could scare or disturb children aged five to eight but there is risky behaviour which might be imitated, including the following:

Although there is little in this movie that could scare or disturb children aged eight to thirteen, there is risky behaviour which might be imitated, including the following:

Some children over thirteen could still be at risk of imitating some of Bean’s behaviour.

Mr Bean’s Holiday is a lighthearted and entertaining comedy with  minimal dialogue and no obvious message. However it does present risky behaviour that children might try to imitate.

Parents may wish to discuss with their children the importance of not going off with strangers or accepting lifts from people you’ve only just met. Parents could also discuss the ethics of taking a bike that doesn’t belong to you and the real life consequences of risky behaviours such as holding onto a vehicle while riding a bike and driving a vehicle when you are too tired.