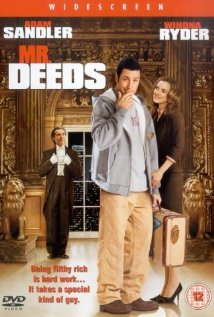 Longfellow Deeds is the very popular local pizza shop owner in the small town of Mandrake Falls. He moonlights as a bad poet trying to write verses for Hallmark cards. He is a regular ‘nice’ guy who talks to old ladies, helps old men across the street and visits people in prison; nevertheless he is no ‘push over’. Unbeknown to him, he has a very rich uncle, Preston Blake, who dies climbing Mt Everest and leaves Deeds forty billion dollars.

Blake was the head of an extensive corporation, the heads of which are very keen to maintain control and keep Deeds out of the picture. They bring Deeds to New York to sign the documents which will hand control of the company back to Chuck Cedar, the present manager. Deeds is quite unaffected by the wealth and all the trappings that go with it and continues to be the same nice, simple, friendly guy. Cedar and his cohorts mistake Deeds’ childlikeness as stupidity and set out to make him look like a fool. They have an unwitting accomplice in the form of Babe Bennett a local reporter for a news station who is trying to get the ‘goss’ on Deeds. She masquerades as Pam Dawson a ‘nice’ girl from a small town. She manages to win Deeds’ heart and loses hers at the same time.

Deeds is heartbroken when he discovers the deception and decides to give his fortune away to charity. He also signs away his shareholding in the company. Cedar then goes about breaking up the company which will benefit all of the shareholders but it means putting thousands of people out of work. When Deeds hears about this, he buys back a share in the company and persuades the other shareholders not to sell. Bennett begs for forgiveness and all ends well between her and Deeds.

There is quite a bit of violence in this film – mainly cartoon style and usually set in a comic context:

Other violent scenes include:

There are quite a lot of scenes that could frighten younger children including:

Most of the violence in this film is cartoon style however a lot of it is over the top and could upset children in this age group such as when Deeds is punching Marty. Also in the scene where Babe falls through the ice, she is in real danger.

There are some verbal sexual references in this film including:

Marty is seen showering and his naked backside is shown.

There is a fair amount of drinking of alcohol and smoking in the film. Mr Deeds goes out with John McEnroe one night on the town and they get very drunk. They throw eggs at cars. The next day Deeds has a hangover.

The following words are used quite frequently:

The word ‘fucking’ is obviously said but not heard. The ‘finger’ is given a couple of times.

The main themes of this film are that there are more important things in life than money and that it is important to maintain the ‘child within’.