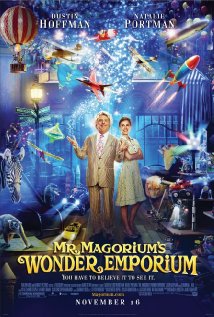 Mr. Magorium (Dustin Hoffman) is the 243-year-old mysterious and eccentric owner of Mr. Magorium’s Wonderful Emporium, “the most fantastic, most magical, most wonderful, toy store in the world.” It is a store where toys come to life and magically pop out of books, and where rooms magically change their appearance depending on the need of the user. Molly Mahoney (Natalie Portman) is the store manager, who spends much of her time doubting herself and dreaming of becoming a concert pianist. Also assisting Mr. Magorium and Molly is nine-year-old Eric, (Zach Mills) a lonely boy with unique talents, who finds it difficult to make friends his own age.

Mr. Magorium hires an accountant named Henry Weston (Jason Bateman) to determine the store’s worth. Mr. Magorium announces that he will soon be departing from this world as he is down to his last pair of shoes, and that Molly will inherit his store after he is gone. But Molly doubts both herself and her ability to create magic and rejects Magorium’s offer of the store. Molly is not the only one unhappy about Mr. Magorium’s departure, the store itself throws a temper tantrum with toys rebelling out of control and the shop’s bright red walls bubbling and turning grey as though infected with a disease.

When Mr. Magorium dies, Molly decides that she doesn’t have the sparkle or magic needed to run the store, and gets Henry to put the store up for sale. However, when a buyer is found and the time comes to sell, Henry objects.

Death and life after death, magic

Children over 5 are unlikely to be disturbed by anything in this film.

Children over 8 are unlikely to be disturbed by anything in this film.

Children over 13 are unlikely to be disturbed by anything in this film.

Mr. Magorium’s Wonder Emporium is an entertaining, fun family film full of toys and magic. The film contained a number of adult themes and messages, and younger children may find sections of the film meaningless, or uninteresting.