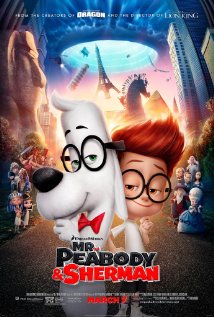 Mr Peabody and Sherman is an animated comedy about Mr Peabody (voice of Ty Burrell), a dog who has dedicated himself to the pursuit of knowledge and a variety of advanced scientific inventions, including the creation of a time machine. Mr Peabody has adopted a boy named Sherman (Max Charles) as a son and apprentice. Together, they travel through time visiting an array of famous historical figures and getting into considerable trouble along the way.

At school, Sherman gets into an argument with a girl called Penny (Ariel Winter). Penny bullies Sherman about his father being a dog and Sherman apparently bites Penny on the arm. As a consequence Mr. Peabody’s fitness to be a father to come under scrutiny by Ms. Grunion (Allison Janney) from Social Services, who has a particular problem with the idea of a dog being the father of a boy.

While Mr Peabody is trying to sort matters out with Ms Grunion and Penny’s parents, Penny and Sherman are left to their own devices and she persuades him to take her time travelling. However, things take a turn for the worse during a stay in Ancient Egypt when Penny is captured and almost married off to King Tutankhamun. Although Sherman manages to save her, the excessive use of the time machine tears a hole in the space-time continuum. People from every era are torn from their homes and begin bleeding through the gap.

Mr Peabody and Sherman now have to work together to save the world from imminent demise. At the same time, the dangerous journey enables Mr Peabody to learn how to be a good parent, and helps Sherman discover what it means to be a good son.

There are limited sexual references in the film, including:

The film contains occasional low–level use of coarse language, name calling and toilet humour. Examples include:

Mr Peabody and Sherman is a heart-warming story about a dog trying to be a parent, and a young boy trying to grow up. Although Sherman had always followed the rules his adoptive father had set in place for him, he begins to want to be independent and explore the world on his own. While he initially rebels, Sherman and his father come to find a peaceful middle-ground of respect and admiration for each other’s own personal identity. While Mr Peabody has had trouble expressing emotion throughout the course of his life, he learns that it is ok to tell his son that he loves him, and to show affection in the way he has always wanted to be able to.

Parents may also wish to discuss the negative and limited roles the film gives to female characters. Penny is for the most part presented as a selfish, manipulating, and un-likeable bully.