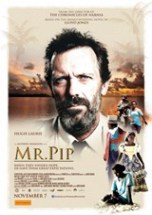 Not suitable under 15 due to disturbing themes and violence

Mr Pip is a drama set in Bougainville, where a civil war has most of the community living in fear. Although the school has been closed down for some time, Mr Tom Watts (Hugh Laurie) – the only white man left on the island – decides to reopen it and run classes himself, despite having no background in teaching. He begins to read Charles Dickens’ Great Expectations to the children, and a young girl named Matilda (Xzannjah) finds particular solace in the famous narrative. She begins to fantasise about living in 19th century Britain as she falls in love with Dickens’ character Pip.

However, after she innocently scribes ‘Pip’ into the sand on the beach, the soldiers oppressing the village arrive and demand to know where the apparent rebel leader Pip is being hidden. Mr Watts and Matilda try to convince them that he is merely a fictional character in a Charles Dickens novel but the soldiers refuse to believe them and there are dire consequences for Matilda, her mother and Mr Watts.

Personal sacrifice; rape in war;death of family members; life under military occupation; the power of reading

The touching story of Mr Pip highlights the strength of the human spirit. Against very challenging odds Matilda remains steadfast in her belief that life will improve in the future. She doesn’t want to feel ashamed of her birth place, but longs for a place that feels more like a safe haven or a stable home. Matilda’s mother Dolores believes that stories must teach you something, and Matilda’s reading of Charles Dickens ultimately teaches her about choices, freedom and independence, as well as the importance of controlling your own fate.

The film raises some important issues to discuss with older teenagers, but the film’s violence and disturbing themes makes it unsuitable for younger teens and children.

Parents may also wish to discuss other issues such as: