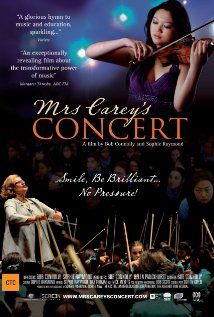 Not recommended under 8, PG to 12 (Lacks interest for young children, Themes)

Mrs Carey’s Concert is a documentary telling the story of how Mrs Carey, a music director at a Sydney girls school, and her staff prepare their students for a concert at the Sydney Opera House.

Mrs Carey sets dauntingly high standards for performance and commitment. The pressure is on students to push themselves to their capacity, but not all students share her passion for music and the event. Numerous students rebel and play up at rehearsals, proving a challenge to the teaching team. However for some students the process turns out to be a life changing

Dealing with the past death of a family member; truancy; stress and anxiety

Children in this age group may also be disturbed by scenes of students in trouble and under pressure.

Younger children in this age group may also be disturbed by scenes of students in trouble and under pressure.

There is some reference to substance use in this movie, including:

Mrs Carey’s Concert is a documentary about school students who experience personal growth through pursuing their dreams with the support of their teachers. It is heartfelt portrayal of a journey for the teachers and students alike.

The main message of the movie is if you put in enough effort and fully commit to your goals, you can achieve things you may not have thought possible.