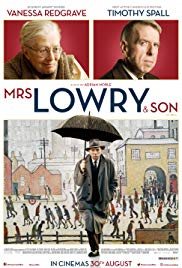 Not suitable under 13; parental guidance to 15 (domestic abuse)

Set in Lancashire in the 1930’s, Mrs Lowry & Son tells the story of the relationship between the famous artist L.S. Lowry (Timothy Spall) and his Mother, Elizabeth (Vanessa Redgrave). Elizabeth Lowry came from a middle-class family and had a comfortable upbringing. However, her husband didn’t live up to her expectations and, due to financial difficulties, the family had to move into a working-class area, which Elizabeth hated. Her husband died, leaving her and her son Lawrence in debt, which made Elizabeth an embittered and tragic person. Consequently, she completely controlled her son and constantly put him down. This left Laurence as a man with little self-confidence.

Laurence worked as a rent collector to look after his mother, who became an invalid in older age and bed-ridden. He devoted his life to trying to make his mother happy, including painting pictures for her, which she never liked, and he never succeeded in pleasing her. L.S. Lowry’s paintings are renowned for their simplistic style and today are worth millions of dollars but his life was obviously a sad one.

Some children in this age group might be disturbed by the level of control that Elizabeth has over her son and the cruel manner in which she treats him.

Mrs Lowry & Son is a biographical drama about the relationship of the artist L.S. Lowry and his mother Elizabeth in her later years. The acting is superb and the story is very well told with some flashbacks to Laurie’s childhood but mainly set during his late forties. The film is quite intense and tragic and is therefore not suitable for children under the age of 13. Parental guidance is recommended for 13-15 year olds.

The main messages from this movie are to overcome criticism and negativity with kindness and perseverance and to continue to follow your own creativity.