Mrs Palfrey at the Claremont 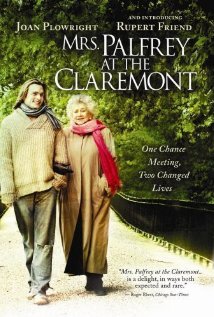 Sarah Palfrey (Joan Plowright), recently widowed, decides to move to London to be closer to her daughter and 26 year old grandson. She chooses the Claremont Hotel as her place of residence so she won’t be a burden on her family. The Claremont isn’t quite what she expected although the other guests are quite interesting, if somewhat nosy, characters. Mrs Palfrey proudly talks of her grandson Desmond to the other guests who are very eager to meet him. Desmond however, doesn’t return his grandmother’s phone calls and the residents start to wonder if he really exists.

Mrs Palfrey meets a young unemployed writer, Ludovic Meyer (Rupert Friend), who turns out to have a lot in common with her, sharing a love of poetry, music and films. The two become good friends and he agrees to masquerade as her grandson to satisfy the Claremont’s residents’ disbeliefs.

Death of loved ones, Family relationships

Children in this age group may also be disturbed be the above-mentioned scenes.

Children aged eight to thirteen could be concerned by some of the above mentioned scenes and by the portrayal of Ludovic’s family relationships. Ludovic talks about how his father died too young and that he has a strained relationship with his mother. Mrs Palfrey goes to meet Ludovic’s mother who talks of the difficulties of raising him on her own and how disappointed she is at how he’s turned out.

Although there is nothing of great concern, some adolescents could be upset by some of the above mentioned scenes in the movie.

Ludovic mentions that he’s “never had so much fun with his clothes on”.

Ludovic and his girlfriend Gwendolyn (Zoe Tapper) are shown in bed with no clothes on, embracing passionately. Nothing particularly graphic is shown.

The word ‘shit’ is used several times in this movie.

Mrs Palfrey at the Claremont is a moving drama, superbly acted by Joan Plowright and Rupert Friend. However it moves at a slow pace and as such would hold little appeal to children and young adolescents.

The main messages from this movie are to embrace life and to live in the present time that you have.

This movie could also give parents the opportunity to discuss with their children the importance of maintaining relationships with loved ones and that inevitability of people dying.