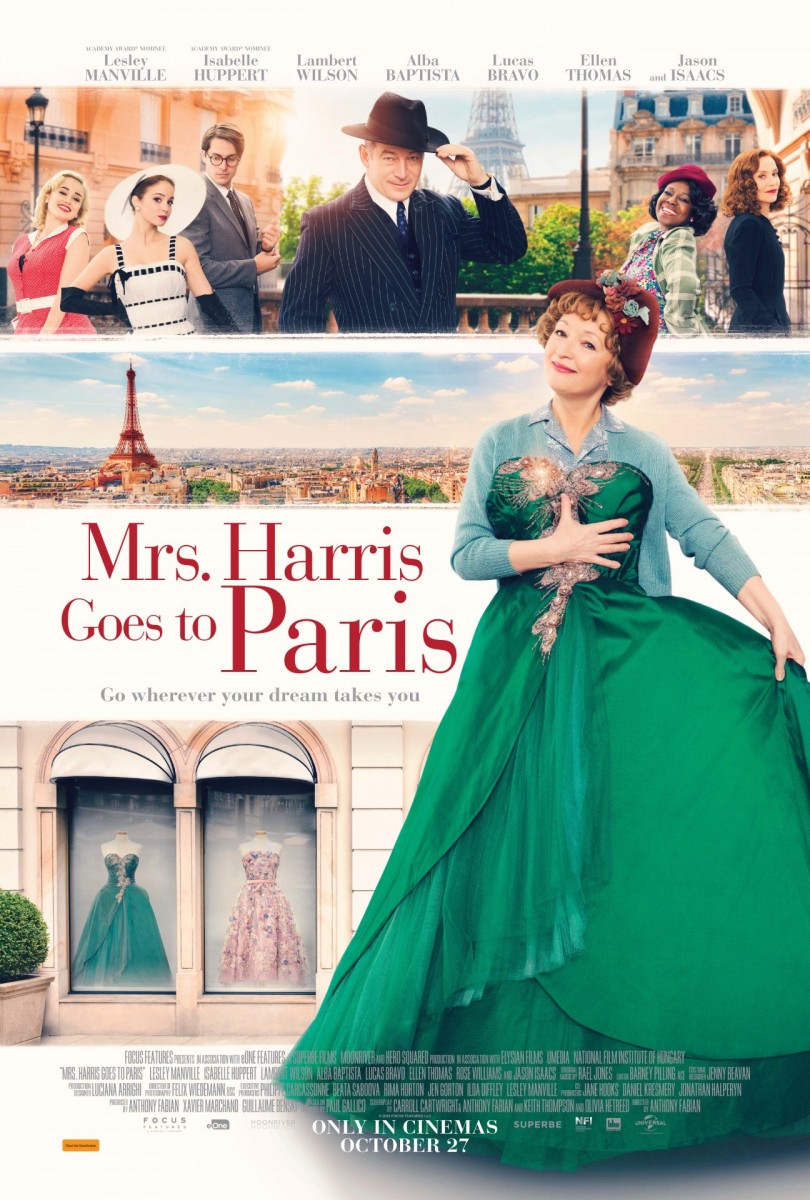 Not suitable under 9; parental guidance to 10 (themes, language)

Hardworking Mrs. Harris (Lesley Manville) is a wonderful cleaner who takes pride in her work and lives a frugal life in London while hoping and praying for her husband’s return from the war. When she finally finds the courage to open a letter and learns that her husband has died, it seems, for a moment, that all her hopes for happiness have died with him. While cleaning the house of a wealthy Lady who routinely fails to pay her wages, Mrs. Harris comes across the most beautiful dress she has ever seen. She soon learns that it is a Christian Dior, that it costs a small fortune and that she must have one for herself. Determined to do more than merely just dream of the dress, Mrs. Harris sets out to save enough to buy one. Doing extra cleaning work, walking instead of riding the bus and taking on sewing jobs, she saves every penny she can. When she receives a surprise visit from an officer who tells her she is entitled to years of war widow back pay, she feels that it is a gift from her husband who is helping her find a way to get to France and find the dress of her dreams. In Paris, a Christian Dior fashion show is underway and, after making a scene about the injustice of being treated unfairly in front of the high class clientele, Mrs. Harris is invited by a Marquis to watch the show as his guest. Here she falls in love with a gorgeous gown but is prevented from having it by a vindictive woman who was offended by having to sit next to someone from a lower class. Meanwhile, word of Mrs. Harris has travelled through the House of Christian Dior and all the saleswomen, models, seamstresses and employees are honoured, amazed and inspired by the courage of a woman who saved every penny to buy a dress meant only for those with excessive money, who refused to be cast aside and who, even when treated poorly, showed nothing but kindness and calm. While waiting for her dress to be fitted and sewn Mrs. Harris weaves her magic on all those around her. She helps the accountant, Andre (Lucas Bravo), who offers her a room to stay in, and the brilliant model, Natasha (Alba Baptista), who longs to be seen as more than just the face of Dior, find love where they least expect it. It is Mrs. Harris's dream that brings her to Paris but she returns home with so much more than a dress. Along the way she begins to believe that anything is possible, she wins the respect and admiration of some of the most influential and important people in Paris, and she shows the world that no kind deed ever goes unrewarded.

Societal segregation in relation to class; Vanity; Being seen only as you outwardly appear and not for who you truly are.

Mrs. Harris Goes to Paris is a comedy drama set in 1950’s Paris. It is a charming, well cast film with plenty of positive messages about the power of dreams, the importance of self-respect and the value of being seen, especially when you are often invisible. The film will best be enjoyed by mature audiences or families with older children.

The main messages from this movie are that even those who are invisible have dreams; that some dreams are more powerful than fairy tales; and that the world needs dreamers now more than ever.