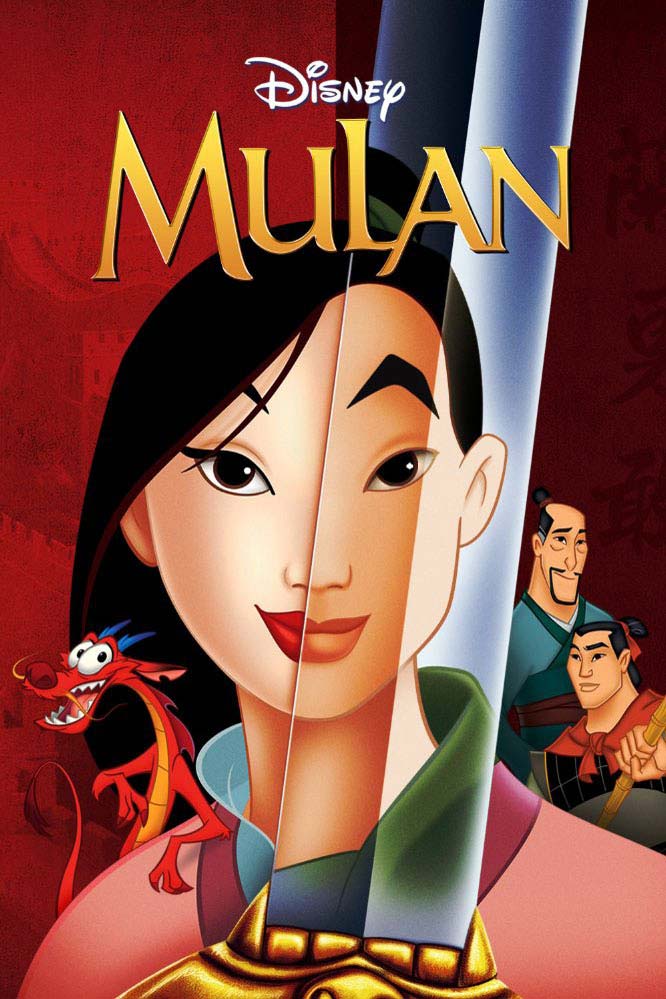 Not suitable under 5; parental guidance to 7 (violence, themes)

When the Huns attack China one male from each family must enlist in the Emperor’s army in order to stop an impending invasion. Bearing the scars of an earlier war, the honourable Mr. Fa hobbles forward to collect his summons. His only child, a daughter named Mulan, begs the imperial officer to spare her father but inadvertently brings shame upon the household by speaking her mind in the presence of men. Society demands that she be meek, forbearing and silent but Mulan is none of these things. Cutting her hair and wearing her father’s battle armour she sets off to enlist in his place. When her family learns what she has done they are terrified as her discovery will mean instant death. The ancestors send Mushu (Voice of Eddie Murphy) a small dragon to look out for her in the hopes he will bring her home safely. Meanwhile, Mulan finds herself in the midst of an unruly group of men led by the young captain Shang. Encountering difficulties with every aspect of her training and on the verge of being sent home, it is only when Mulan begins to look outside the box and find creative ways to do things that she discovers an inner strength which takes her from the back of the pack and transforms her into one of the finest soldiers China had ever seen. Mulan singlehandedly defeats a vast army of Huns but after becoming wounded in battle is exposed as female and loses all credibility as a result. Refusing to give up or give in, she follows the army toward the Imperial City hoping to warn them about an impending attack but no one believes her until the Emperor himself is kidnapped. Once again all hope seems lost until Mulan devises a plan that helps the Emperor, defeats the Huns and saves all of China.

Mulan (1998) is an animated adventure based loosely on the historical legend of a young Chinese girl who pretended to be a boy and won a great victory for China. While the plot is embellished the story itself is inspirational and provides many powerful examples of courage and resourcefulness. Showcasing the power of the female spirit, Mulan is a wonderful family film with lessons for us all.

The main messages from this movie are that the rarest and most beautiful flowers are the ones that bloom in adversity; that wars are not necessarily won by strength or by the size of an army but rather by the courage and ingenuity of the soldiers themselves; and that just one resourceful girl can save a nation and become a legend.