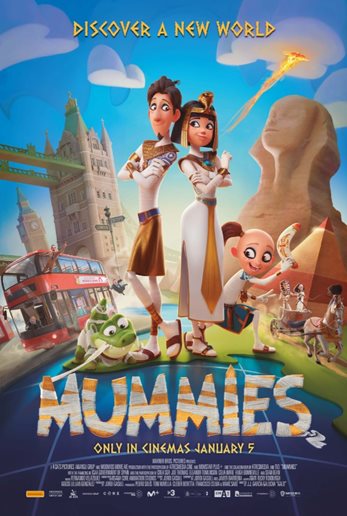 Not suitable under 5; parental guidance to 7 (violence, scary scenes)

In the land of the living-dead, Thut (voice of Óscar Barberán) is a champion chariot racer until one day his opponents, with spikes in their wheels, send his chariot flying, leaving Thut hurt and afraid to get back into a chariot. Thut’s path crosses with Princess Nefer (Ana Esther Alborg) when she nearly knocks him down on her horse and the two have a heated confrontation. The Princess returns to her palace to find out that her father, the Pharaoh (Sean Bean), has decided it is time for her to marry and Thut is chosen to be her husband. Neither of the two is happy with the plan but Thut is entrusted with the family engagement ring to keep safe until the wedding day.

The Mummies’ lives in the after-world are seriously disrupted when a nefarious archaeologist, Lord Carnaby (Hugh Bonneville), bulldozes his way into their protected environment, looking for treasure. He and his two stooges, are excited to find the valuable ring but even more excited to find Nefer herself. They kidnap her and take her into the land of the living, where they keep her locked up in a glass exhibition space. Thut and his younger brother, Sacerdote (Roberto Cuenca Martínez), chase after the villains, mainly to recover the ring as Thut knows the consequences of losing it. They find themselves in the city of London and are baffled by the present-day experience. In the process of finding the ring, they also rescue Nefer and the three have quite an adventure trying to find their way back home. In the process, Thut and Nefer fall in love.

There is a lot of comedic violence in this movie, including:

Mummies is an animated adventure comedy about the real-world colliding with the after-world. It is quite funny but there are some scary scenes and quite a lot of violence, mostly done for laughs. The film is therefore not suitable for under 5’s and parental guidance is recommended for 5–7-year-olds.

The main messages from this movie are overcoming your fears and to follow your dreams.