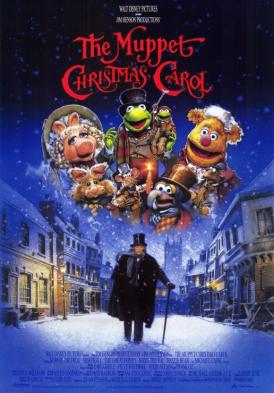 Not suitable under 5; parental guidance for children aged 5 (and sensitive children) (scary themes and characters (haunting, ghosts and spirits; doom of death))

Charles Dickens – the creator of the famous 1843 classic, 'A Christmas Carol' (aka Gonzo from the Muppet family) narrates the story of Ebenezer Scrooge (Michael Caine), a cold-hearted and ruthless mortgage broker, who does not care about anything but making profit. Because of his complete lack of empathy, he is feared and hated by everyone. Christmas is his least favourite time of the year, when his subordinates spend money on "humbug" and want to have time off work. One Christmas Eve, he is visited by the ghosts of two former business associates Robert and Jacob Marley (Statler and Waldorf) who were just as nasty and greedy. They forewarn him that, unless he changes his ways, his fate is doomed. They also announce that three more ghosts are going to visit him that night: the spirits of Past, Present, and Future Christmases. Will the ghosts be able to open Ebenezer's eyes and heart to prevent disaster and to change for the better?

The Muppet Christmas Carol is a sweet, kid-friendly adaptation of Charles Dickens' classic Christmas tale, which is full of positive and inspiring messages about kindness and generosity. The sad and heavy themes are buffered well by the presence of well-known, endearing Muppet characters; funny and light-hearted scenes and songs; and helpful commentary by the narrators Gonzo and Rizzo the Rat. Parental guidance is recommended for young and sensitive viewers.

The main messages from this movie are that it is never too late make positive changes, and that being generous and kind does not only affect others, but enriches one's own life and happiness.