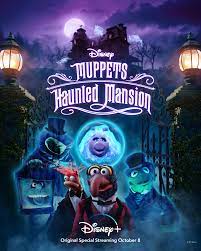 Not suitable under 8; parental guidance to 10 (scary scenes, violence, themes)

The Great Gonzo (voice of Dave Goelz), a dynamic daredevil, has never found a challenge he couldn’t face. While the rest of the Muppet gang is partying for Halloween, Gonzo and his 'King Prawn' friend, Pepe (voice of Bill Barretta), volunteer to spend the night in the spookiest place on earth, the old Mansion of the once-famous magician, The Great MacGuffin, who disappeared a hundred years ago on that very same night. Pepe is looking forward to meeting celebrities and Gonzo is looking forward to being the first one ever to spend the night and live to tell the tale. Throughout the evening the duo encounter a variety of characters including: The Host (Will Arnett), a creepy caretaker (Darren Chris), and a homicidal bride (Taraji P. Henson). In order to leave, Gonzo must face his greatest fears but if he fails, both he and Pepe will remain in the mansion forever. In the elusive room 999 (which changes to 666 after he enters it) Gonzo discovers the scariest thing in the world and learns what is trapping everyone inside the mansion. Gonzo must conquer his fear, rescue Pepe from someone who hopes to love him to death, and together they must leave before dawn or meet the same fate as all who have come before them.

Muppets Haunted Mansion is a musical, made for TV special, that was inspired by the famous Disneyland ride. Featuring brief appearances from many favourite characters, such as Kermit and Miss Piggy, this production is far more sinister than previous Muppet shows and films and is consequently best suited to older audiences.

The main messages from this movie are that we all have fears and that facing them can sometimes be the scariest thing in the world but it is also through facing them that we become free.

This movie could also give parents the opportunity to discuss with their children the importance of talking about what scares them and how to face things or work through things that are frightening.