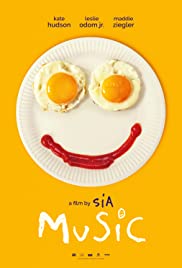 Zu (Kate Hudson) is a recovering alcoholic and addict, struggling to stay sober and to keep to her parole conditions, when she is suddenly thrust into the role of carer for her half-sister Music (Maddie Ziegler) after their grandmother suddenly dies. Music is an autistic teenager; she is non-verbal and relies on a constant and predictable daily routine to feel safe and happy. She has a keen interest in dogs and has the ability to see life as a Technicolour musical experience. Around her, Music has developed a caring and compassionate community who love her and keep an eye out for her in the local neighbourhood. All of a sudden, Music must come to terms with losing her beloved Grandmother, as well as having the chaotic and disruptive presence of her older sister. It is not an easy time for either of them. As Zu struggles to understand how best to care for her sister’s needs, a kind neighbour, Ebo (Leslie Odom Jr.), steps up to befriend and help them. A strong friendship develops between Zu and Ebo. Zu must decide how she wants to live her life and how Music is going to be part of her plans.

Music is a musical drama written and produced by pop music star, Sia. It is an emotional film that tenderly portrays the intimate and sometimes challenging relationship between people with a disability and the ones who care for them. Whilst Music’s disability is obvious, it becomes clear that her sister Zu is facing her own battles with mental health and substance abuse. Although it’s a bit of a tear-jerker, this movie is warm-hearted, sensitive and full of positive messages of hope and survival. The music and dance sequences are delightful. Parents should be aware that there are some strong adult themes in this film and therefore it is not suitable for children under the age of 13 and parental guidance is recommended to 15.

The main messages from this movie are that we cannot walk away from our family and our responsibilities; and that having people to love and care for (that love us too) can be our salvation.