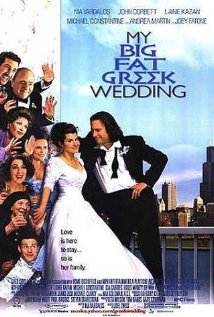 This is a story about Toula Portokalos, a 30 year old second generation Greek woman who is caught between being a Greek woman and wanting to be her own person. She is faced with the family pressure to marry a Greek boy, have Greek babies, and feed everyone. Toula decides that she wants more out of life and convinces her family that it would be in their best interest to support her going to College to study computing. Toula’s mum is supportive of the idea but her father is not to keen on the whole idea. Toula begins College where she blossoms; she changes her image and becomes a happier person. She starts to be the woman that she wants.

Toula falls in love with Ian who is not Greek. She initially lies to her parents, knowing that they would not approve of the relationship. When the relationship starts to become serious so does the situation at home as her family find out she is seeing Ian. Her father is devastated and can’t believe that she is doing this to him. She is told to stop seeing him, and her parents begin to invite a lot of single Greek men around for dinner. Toula continues to see Ian despite her parent’s demands, but she can no longer hide the seriousness of the relationship from her family when Ian proposes to her and she accepts. Gus is still not happy about the situation, and Ian does everything he can to be accepted by her family. He is baptised in the Greek church by cousin Nikki so they can be married in the Greek church. There is continuing concern expressed about Ian by Gus through out the movie as the wedding is planned, planned by everyone but Toula and Ian themselves.

The wedding day comes and everyone is happy. The movie ends on a nice message when Gus gives his father of the bride speech, finally giving his acceptance that we are all different but the same.

There is not much in this movie that will scare children. However, the following scenes may disturb some:

Nothing in this movie should disturb children over 13.

Toula and Ian are lying in bed, presumably after ‘making love’, talking. Ian proposes to Toula and they begin hugging and kissing in bed.

The movie presents a view of the world of traditional Greek culture, the loudness, the food, the guilt, the negativity, and the strong family values.