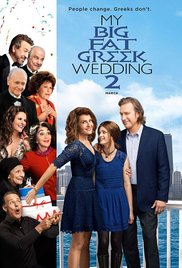 My Big Fat Greek Wedding 2 is a sequel to the first film of the series. It stars Toula Portolakos (Nia Vardalos), who is now married to her one true love Ian Miller (John Corbett). They have a young teenage daughter, Paris (Elena Kampouris), who is slowly pushing the boundaries of Greek tradition as she grows up. Wanting to develop a stronger sense of her own personal identity, Paris begins to apply for colleges outside her home town, thus causing Toula considerable stress and anxiety. At the same time, knowing that their daughter may soon leave to pursue her dreams, Toula and Ian work together in an effort to put the spark back in their marriage.

The story of their family takes place against the backdrop of yet another large-scale Greek wedding.

There are some arguments between family members, but no physical violence.

There are very mild sexual references, including:

There is very mild sexual activity, including:

My big fat Greek Wedding 2 is a comedy sequel featuring the same charming Greek American family several years after the marriage og Toula and Ian. It focuses on the relationship between parents Toula and Ian, and their teenage daughter Paris. With Greek traditions deeply set in stone, Paris’ struggle to become her own person often causes considerable conflict with the rest of her over-involved family. The film highlights the supportive nature of family as well as the need for individuals to develop independence. Although members of the family frequently disagree with one another, they always have good intentions and attempt to support individuals in making the best choices for themselves. Although the film is unlikely to disturb younger children, the themes and sexual references make the film best suited to children over 12.

Parents may also wish to discuss cultural traditions and how these influence the lives of individuals, particularly in regard to gender roles and marriage.