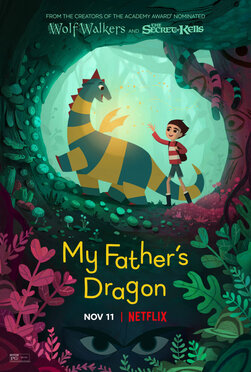 Not suitable under 5; parental guidance to 7 (violence, themes, scary scenes)

Elmer (voice of Jacob Tremblay) and his mum (voice of Golshifteh Farahani) live happily in a small town tending their shop but when things get bad and the town becomes abandoned, they must move to the city to try to make a new start. With nothing but the dream of starting a new store, they scrape together enough money to rent an apartment. However, when the last of their money is gone, Elmer runs away determined to find the means to open the store himself. Elmer hears of a legendary dragon being held captive by wild animals and forced to repeatedly lift their island so that they won’t drown, and he sets off to free him so that he can bring the dragon home and use him to make money for the store. Boris the dragon (voice of Gaten Matarazzo) is very grateful to be free and instantly becomes friends with Elmer but the animals have no intention of letting them get away. Because Boris’s wing is injured, he is unable to fly and must figure out a way to transform himself into a legendary, powerful, dragon so that they can leave the island. Together they search for an ancient turtle that is rumoured to have the answers, while the animals, led by Saiwa, a giant gorilla (voice of Ian McShane), chase the pair all over the island determined to recapture Boris and keep their home from sinking into the sea.

My Father’s Dragon is an animated adventure based on the 1948 award winning children’s book by Ruth Stiles Gannett. Unsuitable for very young children, the film will be best enjoyed by slightly older kids or fans of the picture book.

The main messages from this movie are to believe in yourself, even when no one else does; and to remember that being a good friend is far more important than being right.