My Life as a Zucchini 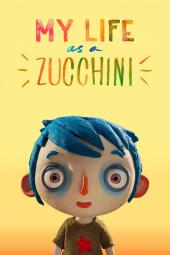 Not suitable under 10; parental guidance to 13 (disturbing themes, sexual references)

Zucchini (voice of Erick Abbate) is a nine year old boy who suddenly finds himself as an orphan. He is taken to an orphanage by a friendly policeman called Raymond (Nick Offerman) where he is taken into care by Madame Papineau (Susanne Blakeslee). Rosy (Ellen Page), one of the workers at the orphanage, introduces Zucchini to his new companions: Simon (Romy Beckman), Ahmed (Barry Mitchel), Jujube (Elliot Sanchez), Alice (Clara Young) and Beatrice (Olivia Bucknor). At first the children laugh at Zucchini, particularly for his name which is what his mother called him, but they soon become good friends.

Simon is the oldest and can be a bit of a bully but it turns out that he is actually kind hearted. All the children are at the orphanage for different tragic reasons and Simon's is because his parents were both drug addicts. A new girl called Camille (Ness Krell) arrives and Zucchini immediately takes a liking to her. Camille had seen her father shoot her mother dead and then commit suicide. At one time, all of the children visit a ski field where they have a lot of fun skiing and throwing snowballs at each other. Raymond continues to visit Zucchini and often takes him and Camille out on various outings. Raymond becomes increasingly fond of the two children and decides to adopt them. It is a hard decision for Zucchini to make; whether to go with Raymond or stay with his friends.

My Life as a Zucchini is a French claymation movie (with subtitles) that deals with very traumatic childhood situations in a gentle and uplifting manner. The orphaned children are lucky enough to find themselves in a caring facility where they are well looked after and find strong bonds with each other. There are positive outcomes and messages in the movie but some of the content is not suitable for children under 10 and parental guidance is recommended to 13.

The main messages from this movie are the need for love and friendship and that family doesn't need to be a biological one.