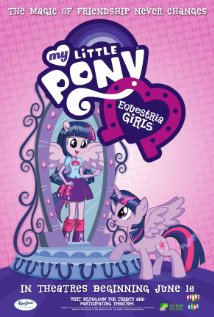 Not recommended under 4, PG to 8 (Scary scenes; Themes)

When Twilight Sparkles (voiced by Tara Strong) has her magic crown stolen by a mysterious night time visitor, she is forced to enter a magic mirror in the hope of retrieving the crown and returning it to its rightful place in the Crystal Empire.  On the other side of the magic mirror Twilight Sparkles comes across an alternative world where she finds she has become a human, and where the humans around her start to become familiar and comforting friends.  However not all of the humans are friendly, and when Twilight meets Sunset Shimmer (voiced by Rebecca Shoichet) she realises that persuading Sunset Shimmer to turn her evil thoughts into good will be her biggest challenge.

There is no product placement in this movie; however the My Little Pony brand is associated with numerous toys and other child-related merchandise.

There are some mild sexual references throughout this movie including;

There is some course language and name calling that children may imitate, including;

My Little Pony: Equestria girls is an animated children’s story about the My Little Pony characters who are confronted with a pony intruder intent on using their power to further her own selfish desires. Although it has a G rating, there are scenes involving scary characters and bullying which may scare or confuse children under six and raise issues for children older than this, so parental guidance is recommended for under 8s. Some under 4s may find the film too scary.

The main message from this movie is that the power of good will triumph over the influence of evil.

This movie could also give parents the opportunity to discuss the real-life consequences of bullying and how it should be managed.