My Little Pony: The movie 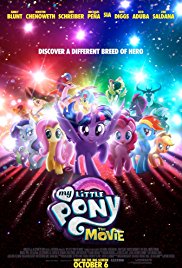 Parental guidance recommended under 7 due to scary scenes and characters.

Princess Twilight Sparkle (voiced by Tara Strong) is organising a Friendship Festival and ponies from all over Equestria are coming. Everything is going smoothly with the help of her friends: Rainbow Dash, Applejack , Pinkie Pie, Rarity and Spike the Dragon . But suddenly, the festival is overtaken by Storm King (Liev Schreiber) and Commander Tempest (Emily Blunt), who capture the city and turn three of the pony princesses to stone. Princess Twilight and her friends escape but they must travel across the Badlands to find the Queen of the Hippogriffs (Uzo Aduba) in order to save their home and their friends.

The movie is part of the My Little Pony franchise

Spike the Dragon has a crush on Rarity and blushes when she talks to him.

My Little Pony: The Movie is an exciting animated epic adventure for young children. The movie includes lots of catchy songs about the importance of friendship and being yourself.

Parental guidance is recommended for children under 7 due to some scary scenes and characters.  These may particularly scare children under 5. At 104 minutes, the film is also rather long for this age group.

The main messages from this movie are the importance of friendship and working together, and to be yourself and accept who you are.

Values in this movie that parents may wish to reinforce with their children include kindness and bravery.

This movie could also give parents the opportunity to discuss with their children the effects of using violence as a way of solving problems.