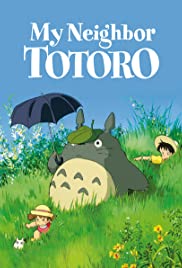 Written and directed by the acclaimed Miyazaki and animated by Studio Ghibli (The closest equivalent for Western audiences is Disney Studios.), My Neighbor Totoro is one of Japan’s most loved and well-known animated children’s films. Set in 1958, The story follows two young sisters, Satuski (voice of Dakota Fanning) and Mei (voice of Ellie Fanning), as they travel with their father (voice of Tim Daly), an archaeology professor, to stay in an old house in rural Japan. Their mother (voice of Lea Salonga) is recovering from a long-term illness and is staying in a hospital nearby. They arrive at the rather dilapidated but charming old house and discover (to their delight!) that it may just be a little haunted. Although they are a little nervous to start with, when little ‘soot sprites’ scoot out of the dark corners of the house, the girls get to work dusting and filling the house with laughter and light. One sunny day as Mei is exploring the lush gardens, she sees two little forest sprites bobbing along through the grass towards a towering and ancient camphor tree. With curious excitement she chases them through the undergrowth as they dash away, leading her directly into a deep, mossy and flower-filled hollow within the tree. Within lies sleeping a big cuddly bear-like being that Mei calls Totoro. At first it is just Mei who is able to see these creatures, but one rainy evening when Mei and Satsuki are waiting for their father at the bus stop, Totoro appears beside them and Satsuki offers Totoro her umbrella. It seems the forest sprites are happy to have Satsuki and Mei living beside them, and together they have some whimsical and magical adventures. The story takes a darker turn when the girl’s mother is unable to come home for the weekend as planned. In disappointment and worry about their mother’s worsening condition, Satuski takes out her frustration by shouting at Mae, who responds by running away, trying to make her way to the hospital on foot. As darkness descends and Mei is still nowhere to be found, Satuski in great despair calls on Totoro to help her find her little sister. Totoro calls out to the ‘Catbus’, a magical flying cat with the body of a bus and asks it to help Satuski find Mei.

Sisterhood; Spirits of Nature; Ghosts and Japanese Animism; Spirituality; Illness; Fantasy; Fear of loss of a parent or a sibling; Running away; Getting lost.

In addition to the above-mentioned scenes and scary visual images, there are some scenes in this movie that could scare or disturb children aged five to eight, including the following:

In addition to the above-mentioned scenes, there are some scenes in this movie that could scare or disturb children aged eight to thirteen, including the following:

My Neighbor Totoro is an absolutely delightful family film. It is whimsical and imaginative, perfectly capturing the magic and mystery of childhood. Parents should be aware that this is not simply a light and fluffy film as it touches sensitively on deeper themes of parental illness and the fear of death. Aside from the visually stunning animation, My Neighbor Totoro is a beautiful portrayal of sisterhood, and the lovely, caring relationship between the two siblings is very sweet. The characters of Satuski and Mei are excellent positive role models; fierce and brave, but compassionate and respectful. It is no surprise that this film has won many awards and remains a cult classic both in Japan and across the world.

The main messages from this movie are respect for the mystery and power of Nature, the joy of imagination, and the importance of family.