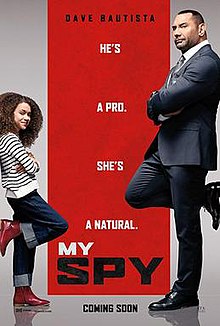 Not suitable under 12; parental guidance to 13 (violence and coarse language)

My Spy begins in the Ukraine where tough CIA agent JJ (Dave Bautista) is on a mission to capture crime syndicate leader Victor Marquez (Greg Bryk). JJ manages to take out the enemy, however, at the same time he also kills all of his own team and Victor manages to escape.  JJ is recalled to Langley where he is put on surveillance duties watching Kate (Parisa Fitz-Henley) and her nine year old daughter Sophie (Chloe Coleman). Kate has recently moved to the US from France after her husband David, Victor's brother and fellow criminal, was killed. The CIA believes Kate might still be in contact with her brother-in-law although it is known that they hated each other.

Sophie is having difficulty adjusting to her new school and classmates, who tease her for being different. However, Sophie is a smart girl and, when she discovers a spy camera in her apartment, she goes looking for the agents. Sophie outwits JJ and his assistant Bobbi (Kristen Schaal) and blackmails them into using them to her advantage. JJ must accompany Sophie to school for ‘special persons' day’ and Sophie soon becomes more accepted by her peers. She also blackmails JJ into teaching her how to become a spy as this is what she wants to be when she grows up. The two end up becoming best of unlikely friends and JJ also falls for Sophie’s Mum, Kate. However, JJ and Sophie end up in a perilous state when Victor returns and kidnaps Sophie.

There is a lot of violence in this movie involving several realistic gun battles, car chases and explosions. Examples include:

My Spy is a comedy/action movie with non-stop action. The violence is real and not tamed down for children, however there is no blood and gore or depictions of dead people. This movie is also quite intense in parts and with frequent coarse language, therefore, it is not suitable for children under 12 but is likely to appeal to teens and adults.

The main messages from this movie are not to judge people by their appearances and that people are not all good or bad but a mixture of both.