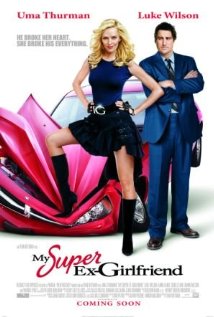 Matt Saunders (Luke Wilson) works a project manager, with his sex-fixated friend Vaughn (Rainn Wilson) and the pretty but ‘taken’ Hannah (Anna Faris). On the way home after work, Vaughn goads the ‘unlucky in love’ Matt to ask a woman on the train out on a date. While doing so, the woman has her bag stolen. Matt gives chase and through a series of lucky breaks, retrieves the bag. Matt earns the gratitude of the woman, Jenny Johnson (Uma Thurman) and she agrees to a date, but what Matt doesn’t know is that she is G-Girl, the city’s superhero.

Over the course of a few dates, Jenny tells Matt of her true identity and the story of how she got her powers. However, Matt senses that all is not right with Jenny/G-Girl, as she becomes increasingly neurotic and jealous of his relationship with Hannah. To make matters worse, he is kidnapped by Professor Bedlam (Eddie Izzard), super-villain and nemesis of G-Girl, who tries to convince Matt to help him lure Jenny/G-Girl into a trap that will strip her of her powers. Matt feels it is all getting too much for him and attempts to break up with Jenny. Not surprisingly, she is none to pleased and uses her powers to make his home and work life a misery. As Matt’s world spirals out of control, he realises who he truly loves and agrees to work with Professor Bedlam to stop G-Girl before everything he values is destroyed.

Children in this age group are also likely to be scared or disturbed by the above-mentioned scenes.

Some of the above-mentioned scenes could also scare or disturb children aged eight to thirteen, particularly:

There are no scenes that would be particularly scary for children over 13 years.

My Super Ex-Girlfriend is a. is a light-weight romantic comedy about a man who gets into, and then wants out of, a relationship with a neurotic superhero. The content of the movie is more suitable for older adolescents and adults who may enjoy the comedy, the plot premise, the comments on relationships and an appealing cast and characters.