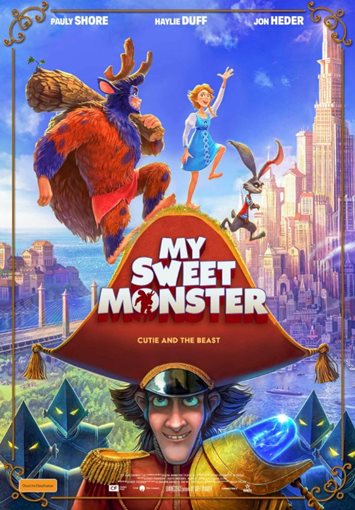 Not suitable under 7; parental guidance to 10 (violence, themes, scary scenes)

Princess Barbara (voice of Haylie Duff) was very sick as a baby and, as a consequence, her father, the King, has spent a lifetime trying to protect her and make sure no harm comes her way. She lives a very sheltered life, guarded by three protective nannies (all voiced by Olga Gunkina) but loves to read heroic tales and, through shared letters, has fallen in love with a supposed prince. When an evil postman named Bundy Joyce (voice of Pauley Shore) discovers the content of the letters, he tries to blackmail the princess into giving him a kiss. When she refuses, he discovers the King’s secret, a small supply of healing water that helps bring life to those who use it. Bundy seizes the vial of water and forces the King to give him his daughter in marriage. Barbara flees from the palace while Bundy pursues her. She is knocked unconscious and taken prisoner by Rabbit (voice of Josh Wilson) and Bogey (voice of Jon Heder), a half-human, half-beast creature who has been charged by Mother Nature with looking after the forest. They intend to take her back to the castle to collect a reward but things change when Barbara saves Bogey’s life. As Bundy assembles a robotic army to locate the princess and destroy her captors, he stumbles upon the source of the magic water and tries to take everything for himself. Barbara, Bogey and Rabbit must join forces to save the forest, the kingdom and also themselves.

Blackmail; Forced marriage; The power of fear; Greed; Environmental degradation and the gross misappropriation of resources.

No coarse language was noted in this movie but there is some name calling, including:

My Sweet Monster is an animated, musical adventure. The film has a stereotypical plot and while it seems to be aimed at younger children due to the graphics and storyline, the themes and general content are really suited to older audiences. However, the film also may lack interest for children over 10.

The main messages from this movie are to follow your heart as well as your dreams; and to look after the environment, for the earth’s resources are not unlimited and there are catastrophic consequences for excessive greed.