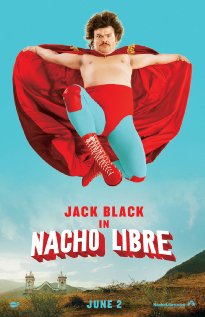 Brother Ignacio (Jack Black) a.k.a. Nacho grows up in an impoverished orphanage in Mexico where he dreams of becoming a Lucha Libre (fighter) complete with tights, cape and mask. He spends hours trying to make his dream a reality but in the end winds up cooking mush from a stock of rotten vegetables because the orphanage can’t afford anything better. Ridiculed and berated by the other priests because of he is different and inefficient Ignacio decides to take matters into his own hands to gain a little respect.

He decides to participate in La Lucha Libre, a free fighting match to raise money for food for the orphans and in the process he hopes to win the affection of the beautiful nun Sister Encarnacion (Ana de la Reguera). In order to make it to the top Ignacio enlists the help of Esqueleto (Hector Jimenez) a homeless thief with a mean left hook. Together they push themselves to the limit, trying everything they can think of to improve their chances in the ring, but without much success. In fact they come off as being so ridiculous that they are actually paid to lose. At first the money is great, but soon Ignacio’s self-respect begins to suffer and he determines to show the world that he is as capable as any professional Lucha Libre. In the process of fighting to win Ignacio loses sight of what he is fighting for and comes very close to losing everything he holds dear.

Parents are reminded that over-exposure to comedic violence can lead young children to believe that violence doesn’t hurt.

Another scene that could scare or disturb children aged five to eight is when Ignacio and Esqueleto find a man with a knife slashing their tyres. The man threatens Ignacio and there are a tense few minutes before Esqueleto stabs the knife holder’s accomplice with his skewered corncob, lodging it in the man’s eye socket. While the scene was over fairly quickly, it is quite grisly and some children could be disturbed by a father figure being threatened in that way.

The above mentioned scenes could also scare or disturb children aged eight to thirteen, particularly at the lower end of the age bracket. Some children in this age group may be confused by a nun being treated as a sexual object.

Nacho Libre is a comedy combining a good deal of bathroom humour with an extremely predictable storyline. The film will most likely appeal to adolescent boys and Jack Black fans. The main messages from this movie are that everybody has a purpose and a destiny and that although sometimes something may seem impossible, with a little determination and a little faith even the under dog can come out on top. Values in this movie that parents may wish to reinforce with their children include persistence, faith and determination.

Parents could also discuss with their children the real-life consequences, of wrestling and fighting and of acting selfishly and putting our own wants before other people’s needs.  They could also discuss other ways that Ignacio’s goals could have been achieved without the use of violence.