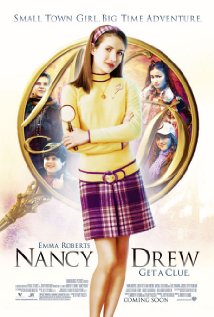 Not recommended for children under 8 years, PG to 15 due to violence and disturbing themes

Nancy (Emma Roberts) is famous in her small town community for her successful crime solving abilities.  However, when Nancy’s father (Tate Donovan) has to move to the bigger, more dangerous city of Los Angeles for work Nancy makes a promise to her father that she will postpone her detective career for a while.  Despite her best efforts, Nancy is unable to resist temptation when she finds herself living in a house linked to the 25 year unsolved murder of a famous movie star.
Nancy finds sleuthing and living in the big city is tough when her old fashioned ways and ‘do gooder’ intentions attract ridicule amongst the local police and her peers.
As in any true mystery, Nancy is aided by supportive accomplices; 12 year old Corky (Josh Flitter) who adores Nancy’s unique ‘non-LA’ ways, and Ned Nickerson (Max Thierot) who is ever hopeful that Nancy will put aside her sleuthing ways to notice him.  Together they follow a range of clues, and face many dangers as they attempt to crack the unsolved crime

Murder, death of a parent

Depending on their sensitivity, some children in this age group could also be disturbed by some of the above scenes

Nancy Drew is a movie remake of the mystery book series of the 1930s.  It attempts to incorporate the charm of the old with the chic of the new.  Unfortunately Nancy’s character is portrayed as annoyingly perfect and out of touch with the modern world, rather than as the feminist and independent character who has been admired throughout the years.  This movie will be of most interest to pre- and early teenage girls.
The main message from this movie is that you should be yourself and make your own decisions despite the pressure of others around you.
Values in this movie that parents may wish to reinforce with their children include:Female resourcefulness, independence and strength