Nancy Drew and The Hidden Staircase 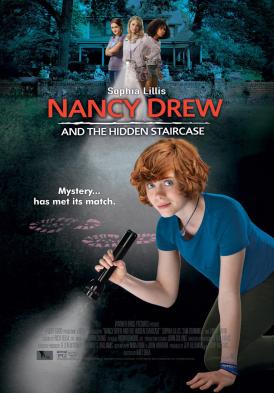 Nancy Drew and the Hidden Staircase is a movie based on the 1939 book of the same name by Carolyn Keene (a pseudonym created by the Stratemeyer Syndicate). It is the second novel in the popular Nancy Drew mystery series. This movie is set in modern times and Nancy Drew and her father have moved from Chicago to the small town of River Heights following the death of her mother. Nancy misses her friends and her life in Chicago but keeps herself entertained by fighting social injustices with rebellious tactics that sometimes get her into trouble. One day she overhears an eccentric older woman telling the Sherriff about the ghosts that are haunting her old house. Intrigued, Nancy offers to help the woman discover the source of the hauntings and arranges to stay a night in the house. When night falls, strange things begin to happen and the night quickly descends into a spooky and disorientating nightmare. When she wakes up in the morning, Nancy is even more determined to discover exactly what is going on in the house. She and her friends put their heads together and use powers of deduction to unravel the mystery.

There is frequent but fairly mild language in this movie, including:

Nancy Drew and The Hidden Staircase breathes fresh life into the Nancy Drew mysteries and brings her rebellious and spunky character to a new audience. This film is likely to appeal to tweens who love a little bit of a scare and the thrill of a mystery to solve. Parents should know that there are one or two very scary moments (which are resolved quickly), some violence, and fairly frequent (mild) coarse language. For this reason, it is not suitable for children under the age of nine. This film may inspire children to get into reading the Nancy Drew book series.

The main messages from this movie are that it is important to take action when you come up against social injustice, and that things are not always as they seem.