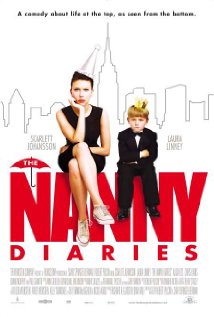 Not recommended under 13, PG to 15 (Themes, Sexual references and coarse language)

Annie Braddock (Scarlett Johansson) has just graduated from college where she studied anthropology and is trying to find her place in the world. Her mother tries to persuade her to enter the business world but, by a strange set of coincidences, she takes a job as a nanny for a wealthy New York family whom she names the ‘X’s. Annie chooses to tell her mother that she’s taken a job in the city and is moving into an apartment there rather than tell her the truth that she’s actually living in a very small room and doing a menial job that she likes to think of as a field study.
Her charge is precocious and neglected Grayer (Nicholas Art).  She has to supply his every need and at the same time cater to all the demands of his mother, Mrs X. (Laura Linney). Annie soon finds out that life ‘on the other side’ is not all that wonderful and that money does not buy happiness. She discovers that Mrs. X, while appearing to be an overbearing, controlling and confident woman, is in fact a lonely, unloved and very unhappy person. Mr. X (Paul Giamatti), who controls all the wealth, is very remote and unfaithful to his wife. He even comes on to Annie.
To add to her problems, Annie falls in love with a young man whom she names ‘Harvard Hottie’ (Chris Evans) who lives in an apartment upstairs. Annie is forced to realise that she has to confront life rather than trying to hide from it.

The Nanny Diaries is a drama which shows some of the worst aspects of a class divided society.
The main messages from this movie are that children need love and time from a parent rather than a set of rigid rules which only satisfy their physical needs, and that money cannot buy happiness..
This movie could also give parents the opportunity to discuss with their children the importance of treating all people, including employees, with respect and dignity.