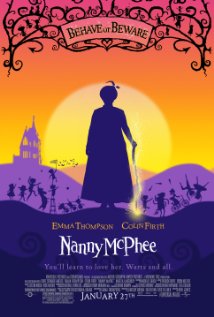 Not recommended under 8, PG to 13 (Themes, Scary scenes)

Mr Brown (Colin Firth), an impoverished undertaker, is having a terrible time trying to get a Nanny for his seven horribly behaved, motherless, children. Only desiring the attention of their father, the children are determined to drive away all nannies and have succeeded in getting rid of seventeen when Nanny McPhee (Emma Thompson) arrives on the scene. Using a form of magic or witchcraft she is able to gain control where others have failed, and slowly begins to restore order to the household.

Unfortunately great aunt Adelaide (Angela Lansbury), after seeing the outrageous behaviour of the children, issues an ultimatum stating that the desperately needed allowance that she gives the family, will be stopped unless Mr Brown remarries within the month. To refuse this would mean that they would lose everything, including each other, and to agree would mean marrying the trampish widow Mrs. Quickly (Celia Imrie).

Employing the same means used to drive away the nannies, the children are determined to get rid of Mrs Quickly too, regardless of the consequences, and at the same time find a suitable replacement.

In addition to the above mentioned violent scenes, there are some scary scenes in this movie including:

Children in this age bracket, could also be concerned by some of the above-mentioned scenes.

Some sensitive children, and / or younger children in this age bracket, could be concerned by some of the above-mentioned scenes.

There is nothing in the film that would frighten children over the age of thirteen.

There is no outright nudity in this movie, although Mrs. Quickly wears very low cut dresses that expose most of her breasts, and takes every opportunity to accentuate this, especially if Mr Brown is around.

There are a number of scenes in which Mr Brown has to throw himself at Mrs Quickly in order to save her from the pranks his children are playing. As a result, he often winds up lying on top of her or with his face in her bosom; this only further ignites Mrs Quickly’s passions.

The film contains no coarse language, but some name-calling, including ‘Shut up’ and words such as poop, bum and bosom.

The movie’s main message is not to be deceived by first impressions, as those that may at first appear truly hideous may be beautiful inside, and likewise those that appear to be the most uneducated may in fact have the most to offer. The movie provides parents with the opportunity to discuss the importance of having rules and of accepting responsibility for your own actions.