Nanny McPhee and the Big Bang 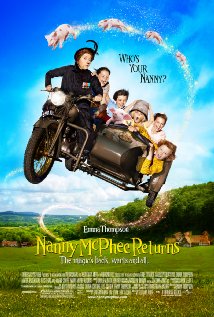 Not recommended under 5, PG to 10 (Violence, scary scenes)

Nanny McPhee and the Big Bang, directed by Susanna White, is a sequel to the successful 2005 “Nanny McPhee”, which was based on Christianna Brand’s “Nurse Matilda” books.  This time, the story is set in the war-torn countryside of 1940s England.  The film opens to scenes of domestic chaos as a mother tries to balance running a small farm, working in a store and raising three children while her husband is away at war.  Just as the harried mum (Maggie Gyllenhaal) reaches the end of her tether, the incredibly ugly Nanny McPhee (Emma Thompson) appears at her door offering to provide child-management assistance.

Although initially suspicious of the unexpected guest, the Green children (Oscar Steer, Asa Butterfield and Lil Woods) and their visiting cousins Cyril (Eros Vlahos) and Celia (Rosie Taylor-Ritson) soon come to respect and like this unconventional woman.

Separation from a parent; family breakdown; war and death.

Children in this age group may also be disturbed by the above mentioned violent scenes and scary images and also the following scenes:

In addition to some of the above-mentioned violent scenes, there is one scene in this movie that could scare or disturb younger children in this age group:

There are some mild coarse language and insults in this movie, including:

Nanny McPhee and the Big Bang is a fast-paced comedy that is likely to appeal to audiences of all ages.  While initially depicting a great deal of violence between children, the film goes on to promote a strong message about the need to learn how to work together with others, rather than simply fight.  Despite the obvious commercial motivation behind creating a Nanny McPhee sequel, the movie’s emphasis on family and community loyalty is delivered with sincerity and warmth.  The young cast members provide particularly convincing performances.

However, viewed from a more critical perspective, this movie can also be seen to promote a sub-theme of enforced obedience through coercion and fear.