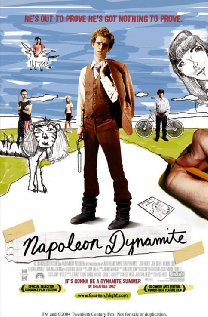 Napoleon Dynamite and his older brother Kip have no parents and are being brought up by their Grandmother. With limited social skills Napoleon manages to get himself onto the bus and to school each day while Kip spends his days chatting online to ‘babes’. When Napoleon’s grandmother falls off her motorbike and breaks her coccyx bone Uncle Rico comes to stay much to Napoleon’s dislike. Uncle Rico is a real smooth talker still living in 1982 and with fanciful ideas about how to make money. He manages to persuade Kip into going out door-to-door selling products.

At school Napoleon befriends Pedro, a new boy from Mexico who has limited English. Pedro decides to ask Summer, the cool girl at school, to the school dance. Of course she refuses as she’s going with Don, the cool guy. Instead Pedro asks Deb, a shy girl at school who seems to like Napoleon and she accepts. Napoleon now doesn’t know who to ask so Uncle Rico persuades Trisha, a daughter of one of his female clients, to go with him. At the dance however, Trisha immediately leaves Napoleon.

Pedro then decides to run for class president and he comes up against Summer with very surprising results.

There is some violence in this movie, which is not particularly graphic and quite often meant to be funny:

Children in this age group could be scared by the above-mentioned scenes. Also, when Napoleon gets a job on a chicken farm, battery hens are all shown stuffed into cages and Napoleon has to stuff one in—this scene is quite distressing.

Children in this age group could still be concerned by the physical harassment of weaker boys and also by the chicken farm scene.

The ‘Doritos’ products is displayed in this movie.

There are some sexual references:

There is no use of substances

The movie’s message is that it’s hard for different people to fit in to an acceptably normal lifestyle.

There are no values in this movie that parents would want to encourage.
The following content could be used by parents to discuss with their children what their own family’s values are, and what the real life consequences can be of arassing smaller or weaker people and making fun of people’s differences.