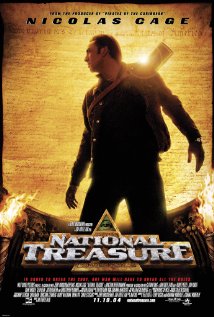 As a young boy, Ben Gates is enthralled by his Grandfather’s tales of long lost treasure being taken from beneath Solomon’s Temple by the Knights Templars and taken to Europe to bury in a very secret place to prevent the British finding it. The only clue to its location is that the secret lies with Charlotte. As an adult, Ben is determined to find the treasure. He believes the Charlotte is a ship which sank in the Arctic Ocean and sets out with a crew of men, his friend Riley Poole and a crew of cutthroats headed by a man called Ian who finances the expedition. They find the ship and discover what seems to be a pipe and a further clue indicating that the map to the treasure is written on the back of the Declaration of Independence in indelible ink. Things turn nasty when Ben refuses to steal the Declaration of Independence and Ian and his mates decide to blow the ship up with Ben and Riley still on board.

Ben and Riley survive the blast and return to the States. It then becomes a race to see who will find the map first as Ben decides he must steal it to prevent it falling into Ian’s hands. Ben enlists the unwilling Dr. Abigail Gates to help and she too soon becomes quite intrigued. The hunt leads them to various historic sights and eventually to Trinity Church where great danger awaits them in a tomb beneath the church. It becomes a battle of wits as to who will succeed.

There is quite a bit of violence in this movie, most of it being unrealistic and without consequence:

Children in this age group could be scared by the above mentioned violent scenes and also by the following:

Children in this age group could also be scared by the above mentioned scenes.

While children in this age group would realise this is a fantasy, some may still be scared by the above mentioned scenes particularly where the man gets burnt.

When Ben takes Abigail home to his father, he presumes she must be pregnant.

The take home message is that good triumphs over evil.

Values parents may wish to encourage include friendship and courage.

Parents could discuss with their children what their own family’s values are, and what the real life consequences can be using theft as a means to an end.