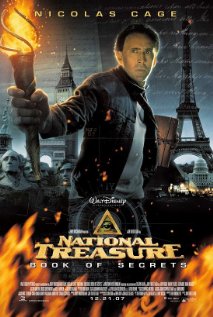 Famed treasure hunter Ben Gates (Nicholas Cage) sets off on a quest to prove his great-grandfather’s innocence. As a result the appearance of a missing page from John Wilkes Booth’s diary, Ben’s relative is implicated in the assassination of President Lincoln. What begins as a righteous crusade quickly becomes a hunt for the greatest treasure of all time.

Ben teams up with his side-kick Riley (Justin Bartha), his former girlfriend Abigail (Diane Kruger), and his estranged parents Patrick Gates (Jon Voight) and Emily Appleton (Helen Mirren). Their search for clues takes them across continents, and into many adventures while trying to stay at least one step ahead of rival treasure seeker Mitch Wilkinson (Ed Harris). Mitch and his gang of thugs will stop at nothing to find the treasure and leave their mark on history.

Putting oneself above the law.

Younger children in this age group may also be disturbed by the above mentioned scenes.

National Treasure - Book of Secrets is an action adventure which, in many ways, is very similar to its predecessor. It has a predictable plot, but is peppered with clues that keep the viewer guessing. Despite an outlandish ending, older children and adults are likely to enjoy the film.

The main messages from this movie are to trust in what you believe to be right and to have faith in the impossible.