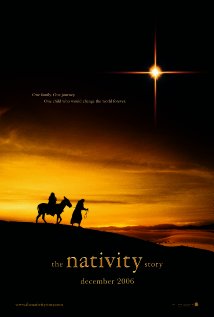 Not recommended under 8, PG to 13 (Viol. Distressing scenes)

The film tells the story of the events surrounding the conception and birth of Jesus as portrayed in the Bible. It opens with Herod (Ciaran Hinds), King of Judea under Roman rule, who is afraid that an ancient prophecy about the coming of a Messiah means that he will lose his kingdom.  He orders the killing of all male children under two in Bethlehem.

Flashing back to the previous year, we find Mary (Keisha Castle-Hughes) living with her parents Anna (Hiam Abass) and Joaquim (Shaun Toub) in the poor town of Nazareth. It is a time of oppression and harsh taxation enforced by Herod.

Mary is betrothed to Joseph (Oscar Isaac). She is told by an angel that she has been chosen by God to bear a son who will be a Saviour for his people.  Struggling to come to terms with this news, Mary visits her cousin Elizabeth (Shohreh Aghdashloo) who is also pregnant and gives birth to the son who is to become John the Baptist.  When Mary returns to Nazareth, her pregnancy is obvious and she has a difficult confrontation with her parents and Joseph.  However, an angel appears to Joseph in a dream and confirms Mary’s story.  Joseph then vows to stand by Mary, no matter what others may say.

Meanwhile, King Herod is determined to find and kill the Messiah talked about in the prophecy. To meet the requirements of a census decreed by Herod, Mary and Joseph are forced to make the difficult journey to Bethlehem. During this journey we see Joseph’s selfless care and concern for Mary and a growing love and respect between the couple.

In Bethlehem, Jesus is born in a rough stable. Local shepherds come to pay homage. Three Magi following the prophecy and prompted by a convergence of planets into a large ‘star’, travel from Persia in search of the Messiah. They find and honour the new baby lying in a manger but return to Persia without obeying Herod’s request to tell him of what they find. Warned in a dream about the threat to the baby from Herod, Joseph takes Mary and Jesus and flees across the desert towards Egypt and safety.

The Christmas story. Oppressive and violent regimes. Seizing and killing of children

The above-mentioned violent scenes could also scare or disturb children under the age of eight.

Children in this age group may also be disturbed by many of the scenes described above.

Some children over thirteen may be disturbed by the scenes involving harm and death to children, and some other scenes.

The Nativity Story is an epic telling of the Christmas story with both visual and emotional impact. The main messages from this movie are the Christian message of a Saviour, the Son of God, born in a humble situation and the triumph of good over evil.

This movie could also give parents the opportunity to discuss with their children the struggles of people living in poverty under oppressive regimes and the consequences of making judgements about people without knowing the full story.