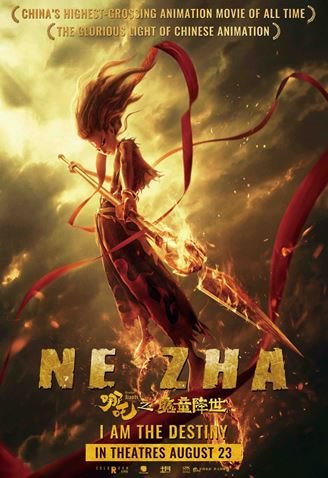 Loosely based on a well-known myth from Chinese folk religion, this Chinese animated movie tells the story of Ne Zha (voice of Yanting Lü), the son of military commander Li Jing (voiced by Hao Chen) and his wife Lady Yin (voiced by Qi Lu). In order to prevent chaos from taking over the universe the King of Heaven has split the ‘Chaos Pearl’ into two parts, the ‘Spirit Pearl’, and the ‘Demon Pearl’. The guardian Taiyi (voiced by Jiaming Zhang) has been sworn to watch over the pearls. The plan is for the spirit pearl to be linked to the birth of Commander Li’s child when he is born and that the demon pearl will be guarded for three years until such time as the prophecy will be fulfilled and it will be destroyed by lightning. Unfortunately, the jealous Shen Gongbao (voiced by Wei Yang,) who was hoping for a promotion from the King of Heaven, sabotages this plan, stealing the spirit pearl and ensuring the demon pearl is connected to the child instead. Ne Zha is born as a demon child and the villagers are terrified of him. Seeing the good in him, Ne Zha’s mother begs the villagers to spare his life and his father promises to protect them from the child, keeping him locked away and journeying to the Kingdom of Heaven in the hopes of breaking the curse. Ne Zha’s mother devotes herself to trying to make his time as happy as possible but she is often called away to duty and Ne Zha is left to his own devices, which often involves escaping his home and terrifying the villagers. Meanwhile Shen Gongbao has taken the spirit pearl to the dragons that are chained in a watery prison. Here the spirit pearl is linked to a dragon egg which becomes the character Ao Bing (voiced by Mo Han) who Shen Gongbao hopes will free the dragons to rule once and for all. When Ne Zha and Ao Bing meet an unlikely friendship is formed, the outcome of which surprises them all.

Ne Zha is a dazzling, fast paced, visual spectacle featuring world-class animation and a gripping soundtrack. The story is captivating and inspiring and contains valuable underlying messages and positive role models. In Mandarin with English subtitles, the movie will appeal to fans of Chinese legends and older audiences who can read fast and follow along.

The main messages from this movie are that you make your own destiny, that you shouldn’t do bad things simply for your own advancement and that misunderstandings, if left unchecked, can easily spiral out of control.