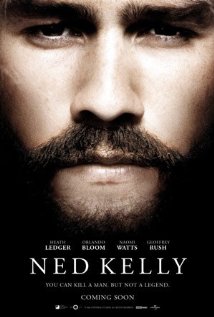 Not recommended for children under 15 (Viol. Themes)

The movie starts with a young Ned Kelly who jumps into a lake to save a drowning boy. It then moves on to the year 1871 when Ned is now a young man. He is part of a large Catholic family whose father Red is dead, leaving the Mother to bring them all up in quite impoverished conditions. Ned takes up fighting to earn some money. One night in the pub, a policeman called Fitzpatrick tries to take advantage of Ned’s sister. He is attacked and pushed off by Ned’s brother Dan and friends. Ned is not actually there when this happens, because he is with a married woman but Fitzpatrick accuses Ned of shooting him. The married woman won’t give him an alibi so Ned takes off to the bush with his brother Dan and his friends Joe Byrne and Steve Hart, forming the Kelly gang.

They become outlaws and progress from robbing banks and holding up coaches to murder. Ned knows he was unjustly accused of shooting Fitzpatrick and puts himself up as a defender of the people against the corrupt Victorian police. Many people admire him but Ned becomes more corrupt by shooting many policemen. A new tough police chief is brought in from South Africa to help track him down culminating in the final shoot out in Glen Rowan.

There is much violent material in this film against people and animals. It is not glamorised or made to appear successful but is performed by the Kelly gang who are often thought of as heroes. The violence includes the following scenes:

This film is not suitable for children in this age group – there is much realistic violence mentioned above that would terrify children.

Again children in this age group would find the violence much too scary.

Children in this age group would find the violence much too scary.

Children under 15 would find the violence very realistic and horrifying.

There is some sexual activity in this film including:

There is a fair amount of drinking in bars.

There is frequent use of coarse language including the following words:

Values parents may to discourage include: