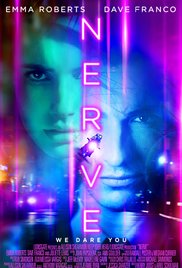 Not recommended under 15 due to themes, violence and substance use.

Nerve is a techno-thriller based on a novel of the same name. The film centres on an online reality ‘truth or dare’ video game, where individuals are able to enter as either ‘players’ or ‘watchers’.

High-school yearbook photographer Vee (Emma Roberts) is living a quiet life after the death of her older brother, making conservative and safe choices and rarely taking risks of any kind. One day, her outgoing and adventurous best friend Sydney (Emily Meade) tells her about an online game called ‘Nerve’, where players can accept dares from watchers, and receive monetary rewards that increase with the danger of the dares. The game has three basic rules: all dares must be recorded on the player’s phone, money earned will be revoked if players fail or do not complete the dare, and players must not report the game to police.

Although the initial dares are manageable and fairly low-risk, they quickly become increasingly dangerous for Vee. When things become too intense, she decides to inform law enforcement about the existence of the game. However, they do nothing in response and Vee subsequently loses all the money from her bank account as a punishment. Vee, with the support of her friend Sydney, attempts to find an alternative way of ending the game without any more harm being done.

Children in this age group are also likely to be disturbed by the violent scenes described above.

Children in this age group may also be disturbed by some of the violent scenes described above.

Younger children in this age group may also be disturbed by some of the violent scenes described above.

There is some use of substances within the film, including:

Nerve is a thriller about teenage behaviour online that highlights a range of very current and socially relevant concerns. The movie illustrates how online anonymity can encourage individuals to behave in unsafe or unethical ways and avoid responsibility. It explores the ways in which peer pressure and the concept of ‘group think’ can be dangerous by ensuring that no individual feels obligated to take responsibility for things that a group might be doing. The film also shows the need for courage in the face of obstacles, and the importance of supportive friendships.

The film’s M rating for ‘mature themes’ is justified and the film also has scenes of violence and substance use that may concern parents. It is therefore not recommended for viewers under 15.

Parents of teens may wish to discuss the issues raised by the film, including: