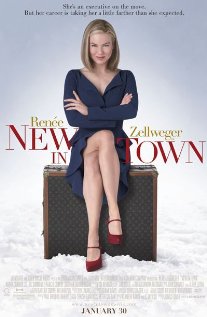 Not recommended under 8 (lacks interest) PG to 13 (Coarse language)

A small manufacturing plant in New Ulm, Minnesota, is having financial difficulties, so the parent company sends Lucy Hill (Renee Zellweger), one of their top executives, down to sort out the problems. Arriving fresh from Miami in smart suit and stilettos, Lucy is immediately confronted with snow, icy roads and a hostile reception from the employees. Adding to her problems is the ‘small town’ attitude that is very prevalent, particularly in regard to female bosses.
Lucy straightaway gets offside with union rep., Ted Mitchell (Harry Connick Jr.) and plant manager Stu (J.K. Simmons). However, when Ted rescues Lucy from a car crash, in which she’s stranded in the snow, Lucy’s feelings for Ted start to change. Lucy also gains acceptance from the locals when she refuses to close the plant down as ordered by head office and starts on a new profitable venture.

There is some violence and accidental harm in this movie, mainly done for comic effect, including:

Apart from the above-mentioned violent scenes, there is nothing in this film which is likely to disturb children

Apart from the above-mentioned violent scenes, there is nothing in this film which is likely to disturb children

New in Town is a romantic comedy very much written to a formula. It is full of stereotypes, but will appeal to teens for its laughs.
The main message from this movie is that people are more important than profits.
Values in this movie that parents may wish to reinforce with their children include: