Night at the Museum 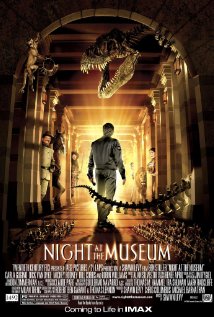 Not recommended under 5, PG to 8 (Scary scenes. Viol.)

Larry Daley (Ben Stiller) is a dreamer with big plans that never take off. He has no job, is about to be evicted from his apartment, and is told by his ex-wife Erica (Kim Raver) that their son Nick (Jake Cherry) needs more stability than Larry currently offers. Larry puts aside his dreams and takes the first job he can get, night watchman at New York’s Museum of Natural History. Larry is to replace three former guards (Dick Van Dyke, Mickey Rooney and Bill Cobbs), who are being retired.

As Larry commences his first night, the museum comes to life, brought about by the magical effects of a solid gold ancient Egyptian tablet. Various exhibits become animated including a T-Rex skeleton exhibit that wants to play fetch with one of its rib bones, miniature cowboys led by Jedidiah (Owen Wilson) battling Roman centurions led by a general named Octavius (Steve Coogan), a wax statue of Teddy Roosevelt (Robin Williams), who becomes Larry’s mentor, numerous African animals, a mischievous monkey, Attila the Hun, Neanderthals and Christopher Columbus. Larry’s first night becomes utter chaos, but with the assistance of Teddy Roosevelt he manages to survive his first night.

For the sake of his relationship with his son, Larry agrees to continue for another night, but this night turns out to be just as much of a fiasco. The following night he takes Nick to work with him to show him what happens. During the night Larry discovers that the former guards are trying to steal the magical gold tablet and Larry, Nick and the rest of the museum’s exhibits must try to stop them.

In addition to the above-mentioned violent scenes, there are several images and scenes in this movie that could scare or disturb children under the age of five, including:

In is unlikely that anything in this movie would scare or disturbe children in this age group.

One brief scene of people at a party during which at one point the word “Tequila” is shouted out during a dance song.

Night at the Museum is quite well done, but does not deliver as well as it could have in terms of storyline or character development, becoming less funny as it progresses. Most older children and adolescents should find the film entertaining and enjoyable to view, as will many adults. The main messages from this movie are the importance of pursuing your dreams and developing positive relationships. Values in this movie that parents may wish to reinforce with their children include perseverance, commitment and compassion.