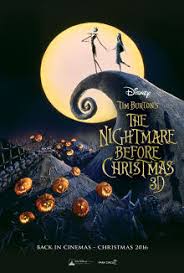 Not suitable under 8; parental guidance to 12 (horror, scary scenes)

Jack Skellington (voiced by Chris Sarandon with the singing voice of Danny Elfman) is the Pumpkin King of Halloweentown, a strange place full of monsters, witches, ghosts, ghouls and vampires. When Jack becomes disillusioned with his purpose in life and leaves Halloweentown, he stumbles into a snow covered Christmastown. Jack is overwhelmed with the spirit of Christmas and decides that this is his new purpose in life.

Unfortunately when Jack returns to Halloweentown, he has misunderstood some elements of what he has seen, and believes that ‘Sandy Claws’ is an evil dictator. He arranges for Santa to be abducted by Lock, Shock and Barrel, three trick- or- treater type children. Jack plans that he will replace him, and Halloweentown starts making its own style of Christmas toys. Sally (Catherine O’Hara), a rag doll who is in love with Jack, but is kept locked in her bedroom by her mad scientist creator, Dr. Finkelstein (William Hickey) is opposed to the idea of Jack taking over Christmas. When Santa is kidnapped and handed over to Oogie Boogie (Ken Page), the malevolent head of Halloweentown’s underworld, she tries to free him, but she too is captured.

In addition to the above-mentioned violent scenes, Nightmare Before Christmas contains hundreds of horror-like cartoon characters, the residents of Halloweentown, some of which could scare or disturb children under the age of five, including the following:

Children in this age group could also be scared or disturbed by the above-mentioned scenes.

Many children between the ages of eight and thirteen years should be capable of viewing the horror-like images in this movie. However, some of the images may still be problematic for some children closer to the age of eight years depending on the child’s level of exposure to horror-like images such as those presented in this film.

Nightmare Before Christmas 3D is a remake of Tim Burton’s original 1994 stop-motion animation film with 3D effects. While the movie targets children, it is too scary for younger children and better suited to older children, adolescents and adults many of whom may find it highly entertaining.

The main message is about finding your identity and being happy with who you are. Values in this movie that parents may wish to reinforce with their children include selflessness and trying to put things right when we make mistakes.

This movie could also give parents the opportunity to discuss with their children what would really happen if they kidnapped someone, gave the sort of gifts given in the movie, poisoned someone’s food or threw themselves from a great height.