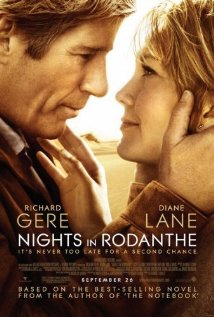 Lacks interest and not recommended under 8, PG to 15 (Adult themes, coarse language)

Adrienne Willis (Dianne Lane) is the harried mother of petulant teenager, Amanda and preteen, Danny. Adrienne’s husband Jack (Christopher Meloni) left her for another woman 7 months previously, but now wants to reunite with Adrienne. Adrienne is overwhelmed by this proposal, and she uses a planned visit to her friend Jean’s inn in Rodanthe, North Carolina, to consider the matter. Jean is going away and has asked Adrienne to look after the inn. Adrienne has fond memories of the inn, as it is where her recently deceased father had brought her for holidays as a child.
Adrienne discovers that only one guest has booked into the inn; Dr Paul Flanner (Richard Gere), a well respected and well known plastic surgeon. Paul is struggling to cope following the breakup of his marriage, the death of a patient while he was operating and the year long estrangement from his son, Mark (James Franco). He has come to Rodanthe to meet the husband (Scott Glenn) of the woman who died.
Adrienne and Paul slowly warm to each other, and connect over their recent experiences of loss. As they each confront these losses and fears, and hurricane that descends upon Rodanthe, they fall in love.

Nights at Rodanthe is a romantic drama about love, loss, grief and redemption. The themes in this movie will be of little interest to younger children. Adolescents may relate to the plight of the young children in this movie. The movie is most likely to appeal to adults, with the themes of loss and of defining one’s identity through marriage, family or career.
Values in this movie that parents may wish to reinforce with their children include: