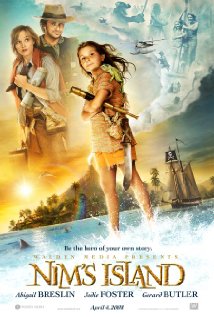 Nim’s Island tells the story of 11 year old Nim (Abigail Breslin) who has lived on a secret island with her scientist father, Jack (Gerard Butler), since the death of her mother when she was a baby.  Nim is left alone on the island for a few days when Jack leaves on a scientific voyage out at sea to find rare algae.  Nim enjoys her time alone on the island reading her favourite Alex Rover adventure novels until all hours and hanging out with her animal friends.  However things change when a bad storm hits, leaving Jack stranded out at sea and Nim alone to fend for herself against a number of natural and some not-so-natural threats. Despite her resilient and courageous nature Nim becomes frightened at being alone and worried for her father’s safety.  When a chance email is received from her favourite adventure novelist, Alex Rover, Nim decides to ask for help, believing that Alex is the male hero described in the books.

On the other side of the globe, Alex Rover (Jodie Foster) is the complete opposite of her alter-ego hero (also played by Gerard Butler). The real Alex struggles with agoraphobia that has kept her housebound for a number of months.  When she receives an SOS from Nim, a little girl alone and afraid, she decides to confront her fears and find the courage of her book character to help her.

There is adventure, action and courage aplenty as Nim, her father and Alex Rover fight their fears to find their way to one another.

Death of a parent; A child separated from a parent and left to deal perilous situations alone

Younger children in this age group may also be disturbed by some of the above scenes and particularly the idea of an 11 year old girl left alone to face danger.

There is minimal use of coarse language in this movie.  Examples include:

Nim’s Island is an adventure film with a strong female role model based on the book of the same name by Wendy Orwell. The main messages from this movie are that:

Values in this movie that parents may wish to reinforce with their children
include: