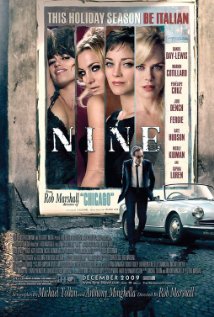 Not recommended under 13, PG to 15 (Themes, Sexual references)

Nine is a vibrant musical story in which the main character is a famous Italian Movie Director Guido Contini (Daniel Day-Lewis). Contini has reached a midlife crisis trying to balance the relationships he has with various women, including his wife Luisa (Marion Cottilard), his mistress Carla (Penelope Cruz), his leading-lady Claudia (Nicole Kidman), his mother (Sophia Loren) and others, with his artistic creativity.

Contini finds himself unable to produce a script for his latest movie and finding little support from those around him, becomes increasingly despairing.

Apart from the above-mentioned violent scenes, there are no scenes in this movie that are likely to scare or disturb children under the age of five.

Apart from the above-mentioned violent scenes, there are no scenes in this movie that are likely to scare or disturb children under the age of eight.

There is some partial nudity and skimpy clothing in this movie.

Nine is a lively and colourful musical adapted from a stage show, full of wonderfully choreographed dance sequences. It contains a stellar cast and some surprising performances.

The main messages from this movie are about confronting the consequences of living a self-indulgent and arrogant lifestyle.

This movie could also give parents the opportunity to discuss with their children the real-life consequences of infidelity and having several lovers in your life.