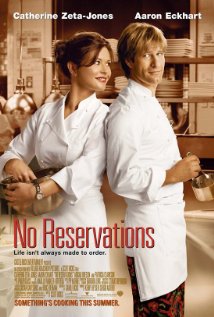 Kate Armstrong (Catherine Zeta-Jones) is a chef who is in charge of a kitchen at an exclusive restaurant in Manhattan. She is a perfectionist and extremely good at her job. Kate likes to be in complete control and therefore will not allow anyone or anything to upset her daily routine and the way she runs her kitchen. Her work is her life and her wish is that life be like a cook book: you pick the right ingredients, follow the directions and everything works out perfectly.
Life changes when Kate’s sister is killed in an accident and she is forced to care for her nine year old niece Zoe (Abigail Breslin). Suddenly her ordered and controlled world is turned upside down. She has to try to understand and look after a grieving child she hardly knows and she can no longer come and go as she pleases.
The first week or two are a disaster and the restaurant owner, Paula (Patricia Clarkson), gives Kate time off to sort things out. Whilst she is away a new sous chef, Nick Palmer (Aaron Eckhart), is brought in to help out. The plan is ultimately to keep him as a replacement for Kate’s pregnant assistant. Nick is the complete opposite of everything that Kate thinks is important - loud and relaxed and unpredictable.
Returning to work, Kate has the dual task of learning to work with her new assistant and caring for a niece who she is growing to love, but finds difficult.

Death of a parent/sibling; family conflict

The only scene that involves violence occurs when Kate is incensed because someone has questioned her ability to cook a rare steak. She is so angry she takes out a raw steak and skewers it to the customer’s table with a big fork, then rips the table cloth from under the plates.

The violent scene mentioned above may worry younger children.  Children under 5 may also be disturbed by the film’s central theme of a child’s mother being killed in an accident and the scenes of family distress and conflict involving Zoe and her aunt.

Children over 13 are unlikely to be disturbed by this film.

No Reservations is a romantic comedy based on the German film Mostly Martha. The movie’s message is that life cannot be controlled and is never ‘made to order’ but that you need to be flexible and deal with whatever challenges you are faced with. It also highlights the need for life/work balance and the importance of relationships and family.
The movie also shows the need to be flexible in working with others and to try to understand how others work.