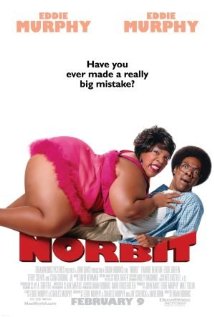 After being thrown from a speeding car as a baby, Norbit grows up at Mr. Wong’s (Eddie Murphy) Chinese restaurant and orphanage. He is befriended by an orphan named Kate and later by young girl called Rasputia, who becomes his protector from the local sandpit bullies.

A number of years later a now adult Norbit (Eddie Murphy) is married to, and totally dominated by, Rasputia (also Eddie Murphy) and her three muscle-bound extortionist brothers Big Jack (Terry Crews), Earl (Clifton Powell) and Blue (Lester Speight). One day Norbit comes home early and is devastated when he finds Rasputia in bed with her aerobics instructor Buster (Marlon Wayans). However Norbit’s devastation is short lived when a grown-up Kate (Thandie Newton) re-enters the picture. Kate is back in town to buy the old orphanage from Mr. Wong and marry her fiance Deion (Cuba Gooding Jr.). However Deion intends to cheat Kate out of her orphanage which he intends to turn into a strip club with Rasputia and her three brothers.

Most of the violence in this film is intended to be comic but several scenes depict  more realistic and disturbing violence, including several scenes of domestic violence. Examples include:

In addition to the above-mentioned violent scenes, children under the age of five may find the threatening appearance and manner of Rasputia and her three brothers scary.

It is unlikely that any scenes or images in this film would disturb children in this age group.

It is unlikely that any scenes or images in this film would disturb children in this age group.

Crude sexual references are made continuously throughout the film. Jokes are made in relation to women, gay and lesbian relationships, car sex, condoms and prostitution. Examples include.
•Norbit is served a portion of chicken referred to a “Turkey arse,” the portion visually resembled a human buttock. When Norbit is served the meal he is told “Bon appetitty.”
•A man states “Back when I was in the game” made in reference to the prostitution of women.
•A man states “No need to buy milk if you can own the cow.” Made in reference to Norbit having sexual relations with Rasputia.
•In reference to the size of Norbit’s penis Mr. Wong states “Norbit had a pee pee the size of an egg roll.”
•When Rasputia tell Norbit that she is pregnant she tells him that “My titties are itching.”
•In reference to the appearance of Rasputia’s buttocks, her dance instructor states “That looks like the harvest moon.”
•Two men make reference to the good old days when they were “pimping”. The same two men made reference to “Selling bitches to Johns, and selling Johns to bitches.”
•When Buster (dance instructor) came over to visit Rasputia Norbit states “There’s cold beer in the fridge and clean sheets on the bed so have a good dance lesson.”
•A girl tells two men “I want to be a whore, where do I apply?”
•Rasputia tells Kate “I can’t keep Norbit off me…he put my head through the bed head every night.”
•When Rasputia is about to have a bikini wax she states “Got to go mow the lawn.” Following the waxing Rasputia looks down at the waxed area and states “I was looking for Norbit’s police whistle.”

There is some nudity and sexual activity in this movie, including:
•Rasputia, wearing skimpy lingerie (cleavage, legs and abdomen are visible), jumps onto Norbit knocking him back on to the bed, which breaks under their weight (this happens several times in fetish wear).
•During a dance class Buster lies on the floor with a woman straddled across his chest with her crotch in his face.
•One scene contains a painting of a nude woman with spinning propellers attached to her nipples.
•Norbit comes home early and hears noises coming from his bedroom. He opens the door and finds Rasputia naked in bed with Buster (Dance instructor) both are covered to the shoulder with blankets. Buster gets out of the bed uncovered and we see his bare chest, buttocks and legs.
•Rasputia, wearing revealing clothing, dances on stage in a strip club and sits in a chair and pours water over her body.
•While Norbit is lying in a hospital bed, Kate leans over him. When Norbit looks down Kate’s top his heart monitor rapidly increases.
•When Rasputia goes to a pool she wears a bikini, but it appears as though she is not wearing any bikini bottoms. When questioned by an attendant she lifts a large roll of stomach fat to show the attendant her bikini bottoms.
•Rasputia gets into a bubble bath, showing her bare back and the side of one breast.
•Rasputia, while wearing skimpy clothing and covered in soap suds, leans over a car simulating an exotic dance while washing it and pressing body parts against the glass etc. The scene is an imitation of Paris Hilton's car-washing commercial.
•There are several images of women wearing swimsuits that reveal cleavage, bare abdomens, legs and backs.

There is some use of substances in this movie, including:
•During a wedding a man drinks an unknown substance from a flask and other people drink champagne.
•In a restaurant Norbit and Kate drink wine together.
•Rasputia and Buster smoke cigarettes in bed.
•Two men smoke cigarettes.
•Kate and Norbit drink wine coolers together while dancing.
•Rasputia’s brothers discuss acquiring an alcohol licence.
•People are depicted consuming alcohol in a strip club.

The film Norbit contains continuous low level coarse language, putdowns and racist comments, including:
•When Mr. Wong finds Norbit as a baby he states, “A black one - you can’t give these ones away.” followed by, “You’re an ugly one.”
•“When you answer the phone try to act white.”
•“You stupid orphan.”
•“You married a gorilla.”
•“Get your stupid black arse back here.”
•“Get your arse up and hold my hand.”
•“Bug eyed bastard arse.” “I’m tired of playing with your arse.”
•“Saddle tramp whore.”
•“Go clean that shit up”.
•“You screwy dame.”
•“Norbit you’re pissing off everyone today.”
•Damn, arse, bitch, God damn it, Jesus Christ, Tramp, Pimping whore, Little bastards, Hell, Mother of god, For Christ sake,

Other material that may offend
•Norbit and Kate (aged seven years) sit on a toilet next to each other with the pants around their ankles the audience is told that they learnt to “poo poo” together
•There are a couple of scenes depicting Rasputia passing gas loudly flatulence
•Mr. Wong tells Norbit that when he was living in China he sold his two-year-old daughter for a Yak.
•Rasputia’s brothers pass Mr. Wong a piece of paper with an offer written on it to purchase Mr. Wong’s restaurant. Mr Wong replies that he will make a counter offer, he then picks up the paper puts it down the back of his pants, as if using it to wipe his buttocks, and hands it back to Rasputia’s brothers.
•Mr Wong made reference to Norbit being bitten on the buttock by a snake, saying “bite Norbit on arse very close to hole,” Mr. Wong then made reference to considering having to suck the poison out of Norbit’s buttocks.
•At one point Mr. Wong refers to a Chinese snuff film.

The film’s main message is about persevering through adversity and fighting back against those who would dominate and oppress in order to find true love and happiness.

Parents may wish to question the negative stereotyping of Afro-Americans and overweight people, and the sexism and domestic violence shown in the film.