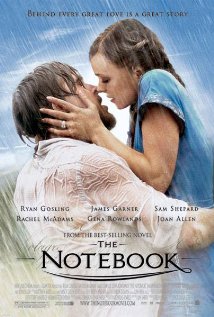 The Notebook is a classic love story retold through the reading of a notebook to an elderly female patient who is in a nursing home, suffering from senile dementia. The story goes back to the 1940s where Allie Hamilton, who comes from a middle class background and is destined for college in New York, falls in love with lumber yard worker, Noah. At first Allie is indifferent towards Noah but is won over by his daring for life and his adventurous spirit. The two fall deeply in love, but their love seems doomed as Allie’s wealthy parents have plans for her life that definitely don’t include a relationship with ‘trash’ like Noah. They relocate to New York so that Allie can go to college and the many letters that Noah writes never reach Allie’s hands.

In the meantime war breaks out and Noah goes off to fight. Allie takes up work nursing wounded soldiers where she meets Lonnie who comes from ‘Southern money’. Lonnie is far more acceptable to Allie’s parents and the two become engaged to be married. Shortly before the wedding, Allie sees a picture of Noah in the newspaper standing next to a grand house, which is the one he had promised to renovate for her. This causes Allie much confusion and she decides to return to Seabrook to find Noah and determine her true feelings.

There is a little violence in the movie when Allie and Noah fight and Allie punches and slaps Noah. This happens a couple of times.

The following scenes would scare children in this age group

Children in this age group could also be scared or disturbed by the above-mentioned scenes.

Some children over the age of eight could still be disturbed by the above-mentioned scenes particularly the war scene and the scene in which the elderly woman becomes violent and needs to be restrained.

Younger children in this age group may be disturbed by the above-mentioned scenes.

There is quite a lot of drinking of alcohol: at a dance, at dinner, in bed, in the office. Allie and Noah drink out of bottles.

The take home message of the movie is that ‘love conquers all’. Values parents may wish to encourage include:

The movie may raise issues about sexual relationships that parents can discuss with their children.