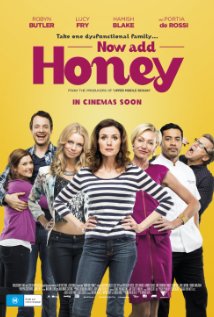 Honey (Lucy Fry) is a sixteen year old Hollywood child star. While she is in Australia on holiday, Honey’s mum Beth (Portia de Rossi) is arrested for smuggling drugs into the country and is sent to a rehab facility. Honey is forced to live with her Australian aunt Caroline (Robyn Butler). When Caroline’s life begins falling apart, Honey must learn how to live in the real world and take care of herself, and Caroline’s family breakdown helps her discover the importance of accepting herself.

Now add Honey is an Australian comedy that examines the taboos around nudity and considers the negative influence that child stars can have on their young fans. It raises interesting topics for discussion with teens, but because of drug use, sex themes, nudity and some coarse language, the film is not recommended for under 13s.  Parental guidance is recommended for 13 - 15 year olds.