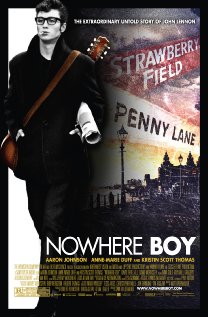 Not recommended under 13, PG to 15 (Adult themes. Lacks interest for younger viewers)

Nowhere Boy is the story of John Lennon’s early life and childhood. John (Aaron Johnson) was abandoned by his mother at the age of five and brought up by his Aunt Mimi (Kristin Scott Thomas). As a teenager, John has difficulties coping with this fact and often recalls troublesome events from his early childhood. This is exacerbated when he discovers his Mother Julia (Anne-Marie Duff) is living not far from him with a new family.

Julia Lennon is a musically creative woman who inspires John, but she is emotionally unstable and also has a detrimental effect on him. John’s inner turmoil and search for identity often land him in trouble and he is suspended from school for bringing pornography into the classroom. He finds pleasure in music and art and starts up a rock’n roll band at the age of 17 when he meets the gifted Paul McCartney (Thomas Sangster). John eventually learns the truth about his past and the tragedy of his Mother’s life.

Dysfunctional families; Abandonment of a child

In addition to the above mentioned violent scenes, there are some scenes in this movie that could scare or disturb children under five, including the following:

Nowhere Boy is a biographical drama of John Lennon’s early life. It is quite gritty and very well portrays the era he grew up in, a post-war Britain in the throes of great social change.

The main message from this movie is that people are able to succeed in life and overcome difficulties that have arisen from a traumatic childhood.