Nowhere Boys: The Book of Shadows 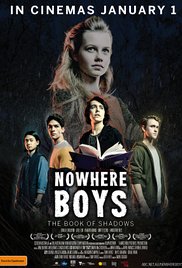 Not recommended under 10; parental guidance 10 – 12; Suitable for 12 year olds and over (sci-fi action violence; supernatural and magical themes; scary scenes).

Nowhere Boys, the ABC sci-fi/fantasy/drama TV series aimed at ‘tweens’ and teens, follows the adventures of four teen boys: Felix (Dougie Boldwin), Andy (Joel Lok), Sam (Rahart Adams) and Jake (Matt Testro), who find themselves stranded in a parallel universe. In the film Nowhere Boys: The Book of Shadows, the four boys have been back in their own reality for over a year having battled demons and discovered the use of magic. The boys have drifted apart however, and are on the verge of going their separate ways when Felix discovers a secret book of magic, the Book of Shadows, concealed under floorboards in a hidden room. In their bid to go their separate ways, the four boys employ magic from the Book of Shadows to help them. However, in the process, they unwittingly unleash the forces of Chaos in the form of a teen girl named Tegan (Angourie Rice), who has a giant sized chip on her shoulder and a thirst for revenge. Tegan uses her powers to entangle and endanger family and friends in chaos and disaster, her powers threaten the very existence of the multiverse. In order to defeat chaos and restore order the four boys are forced into a final showdown with Tegan with the fate of the multiverse hanging in the balance.

The film contains some low-level action violence and peril related to supernatural and magical events; no blood and gore nor injuries are depicted. Examples include:

In addition to the above-mentioned violent scenes, there are several scenes in this movie that could scare or disturb children under the age of five, including the following:

The film contains no nudity it but does contain infrequent very low-level sexual activity. Examples include:

The film contains no depiction of substance use.

The film contains some occasional name calling and putdowns. Examples include:

Nowhere Boys: The Book of Shadows is a sci-fi, fantasy, action adventure film targeted at tweens, teens and fans of the ABC TV series Nowhere Boys. While the cast may appeal to fans of the series, the lead characters are only mildly convincing as magic wielding superheroes capable of saving the universe. In terms of action and violence Nowhere Boys is on a par with the TV series Power Rangers while special effects are basic. While Nowhere Boy: The Book of Shadows is more suited to the TV screen than the big screen it will still appeal to and entertain younger teens, but will fall well short of the mark for older teens.

The main messages from this movie include: